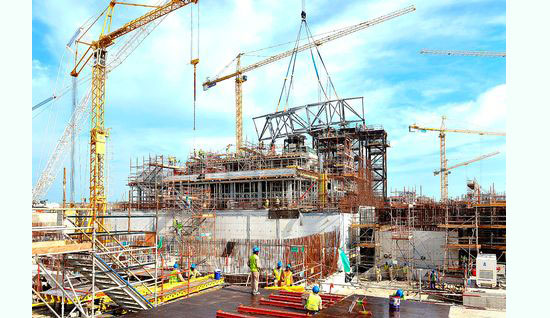 The Louvre Abu Dhabi has reached a milestone with the first segments of the museumâ€™s iconic dome lifted into position.
Tourism Development & Investment Company (TDIC), the master developer of the ambitious project, said the dome, which has a 180m diameter and includes 10,800 square steel tubes, will feature 85 segments weighing 30 to 70 tonnes and built from more than 100 square steel tubes.
It said they would be assembled on the museumâ€™s construction site prior to being lifted into place atop of 120 temporary support towers by a specially-commissioned crane.
A 600-tonne capacity crane will be used to construct the sections of the dome closest to the outside edge.

However, once construction on the centre of the dome started, a 1,600-tonne plus capacity crane will be used to allow the assembly of the pieces efficiently.

A computer image of the Louvre Abu Dhabi, designed by the French architect Jean Nouvel. The building is expected to cost about $108 million to build, and will include art from all eras and regions, including Islamic art.