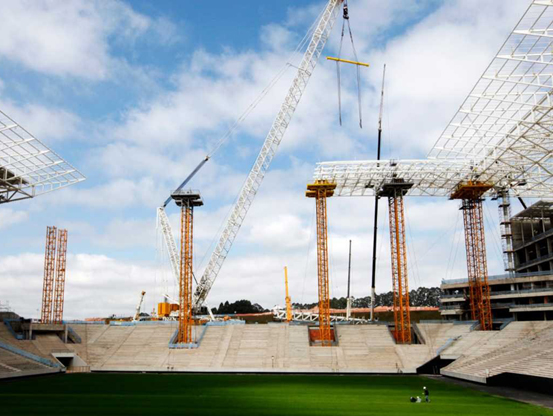 Since the global financial crisis ended, construction spending has roared back.Â In the U.S., experts are debating whether the housing recovery has seen its top.

In China, on the other hand, experts fear the country has been completely overbuilt with ghost cities, empty lots and half-finished construction projects seemingly everywhere. However, tower cranes are popping up all over the world.

Since nobody is really sure where global construction is headed, perhaps it’s best to tell this story in images.

Toronto, Canada: Cranes may be a sign of a massive housing bubble. A construction worker at a condominium site in Toronto last year. Condo growth in Canada’s bubbly housing market isÂ scarily above historical averages. “In its July Monetary Policy Report, the Bank of Canada published a chart thatÂ sounded the alarm on overbuilding, showing condos were being constructed at a rate more than 200 deviations above the historical average,” reports Business In Canada’s Lucas Kawa.

Sao Paulo, Brazil: Construction is booming in preparation for the World Cup. Rio de Janeiro, Brazil: The emerging country will also be hosting the Olympics. Pictured here is the construction site at the Olympic Village. Rio de Janeiro will host the 2016 games, but hasÂ only spent a fraction of its infrastructure budget so far, Bloomberg reports. Officials are concerned if the Brazilian city will be ready without delays. A construction crane towers over Beijing, where the 2008 Olympics fueled a mega-construction boom. ButÂ as the Wall Street Journal reports, “Five years on, with barely a pause in its breakneck growth, the capital appears to have run out of office space,” and will have to build out into the suburbs. Construction at the Central Business District in Beijing. With the city nearing capacity, the government wants to build aÂ sprawling new financial districtÂ in southwestern Beijing to help quell the shortage of office space, the Journal reports.

Guangdong, China: Strange architecture could be proof of a bubble. A 450-foot, oddly-shaped building is under construction in the Guangdong province of China on September 24.

Shandong, China: Residential construction fills the investment needs of people who have few other options. Here are more workers by a crane at a residential construction site in the Shandong province of China on November 3.

Greece: The economy may be in depression, but construction continues somewhere. A worker operates a crane at the construction of Greece’s new National Opera, one of the largest construction projects in Greece since the 2004 Olympics. Greece has struggled with persistent unemployment, butÂ recently forecasted economic growth of 0.6% for 2014. That would be the country’s first economic expansion in 6 years.

Madrid, Spain: Cranes are signs of life in an economy finally emerging from recession. A worker stands on top of a construction project in Madrid on October 18. Spain has struggled as of late, but recentlyÂ emerged from a two year recessionÂ after positive Q3 GDP figures. It may be the first sign of life from the beleaguered European nation.

Jakarta, Indonesia: Despite a weak currency, this country continues to be one of the hottest emerging markets in the world. The construction of a traffic-avoiding railway in Jakarta on October 10.Â According to the Wall Street Journal, “Building rentals at Jakartaâ€™s main business areas, where most big firms are located, have risen between 14% and 23% this year.” And the trend is predicted to continue in the next few years, bolstering construction.

Jammu, India: Infrastructure is lacking in India, which means plenty of room for construction. Lisbon, Portugal: Once one of the most beleagured economies in Europe, Portugal is coming back. A construction worker in Lisbon, Portugal on August 9. After its mostharrowingÂ recession in 40 years, Portugal is finally starting to get back on the track. Leaders expect the economy toÂ grow 0.8% in 2014, which is minimal, but at least it’s positive.

Europe at large: Contruction at the ECB reflects the rise of global monetary policy. Graffiti on the fence outside the construction site for the new European Central Bank headquarters in Frankfurt on August 28. As the ECB gets a new home, its interest rate and bailout policies going forward will undoubtedly impact construction in the eurozone. Last week, the central bankÂ lowered its benchmark refinancing rate.

The US: Affordability remains high and supply remains tight. Construction will continue. Carpenters in Brandywine, Maryland on May 31. In recent months, some observers have speculated that rising mortgage rates could derail the so-called housing recovery.Â “And our in-house regression work shows that incomes and jobs actually matter more to the real estate market than mortgage rates â€” not that rates don’t matter. They do. But it’s all relative. We went back to those years when mortgage rates rose but income growth accelerated and found that, in those episodes, on average, there was no perceptible impact of the rising yield environment on sales or starts,”Â Gluskin Sheff’s David Rosenberg wrote to clients this summer.

14 Pictures Of Cranes That Show What The New World Construction Boom Looks Like was last modified: November 12th, 2013 by Ron Selby