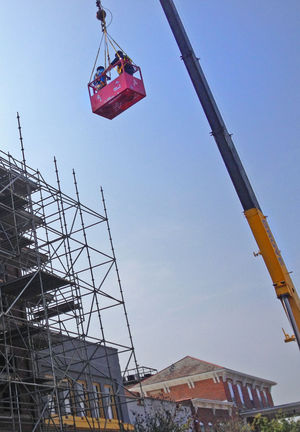 Project Manager Tony Akers and Supt. John Huff, both of SSRG Structural Systems, ride to the top of Nelsonvilleâ€™s Preston Building so they can plan how they want workers to proceed on the fire-damaged building

NELSONVILLE, OH – Being suspended from a tall crane is probably not most peopleâ€™s idea of safety, but workers on the fire-gutted Preston Building in Nelsonville are using a crane as a safety precaution.

Initially, workers will be suspended in a basket from a crane to use pole saws to cut away debris.

â€œItâ€™s the safest way to do it right now,â€ said John Huff, project superintendent for SSRG Structural Systems of Cincinnati. He said using the crane and basket lessens the risk of injury in case a wall collapses.

The Preston Building was gutted by fire in April. Since then, the area of the Public Square where the building is located has been fenced off as a safety measure.

Wednesday morning, Huff and Project Manager Tony Akers rode the basket to the top of the building to, according to Huff, come up with a â€œplan of attack.â€

The company will be shoring up the front and side walls of the building. Huff said the front will be done first so that fencing on the Public Square can be removed for the Parade of the Hills, which starts Aug. 19.

â€œThe goal is to reduce (the fenced off area) as much as possible,â€ said Colin Widdoes of RVC Architects. He said that because it will still be a work site, it may be necessary to keep part of the area blocked off.

The crane and basket will also be used for some of the shoring work, Widdoes said.

Huff said that once the walls are shored up, fire investigators will be able to go into the building.

Fire Chief Harry Barber said the cause of the fire has not been determined, and investigators from his department and the State Fire Marshalâ€™s Office have not been able to go into the building because of safety concerns.

More than likely, they will enter the building before the interior is cleared of debris so that possible evidence wonâ€™t be further disturbed before they examine it, Barber said. He indicated that an insurance investigator might also want to go into the building.

In addition to shoring the front and side walls, SSRG will tear down the damaged back wall and construct a new concrete block wall with an exterior brick facade, Huff said.

Widdoes said once the side walls are braced and they can be examined more closely, an evaluation will be made on how much of the side walls can be retained.

According to Huff, SSRG also will be constructing two new floors behind the facade and also putting a roof on the building.

The resulting building will be three stories, which was the case before the fire, Widdoes said.

The building is owned by Stuartâ€™s Opera House Inc.