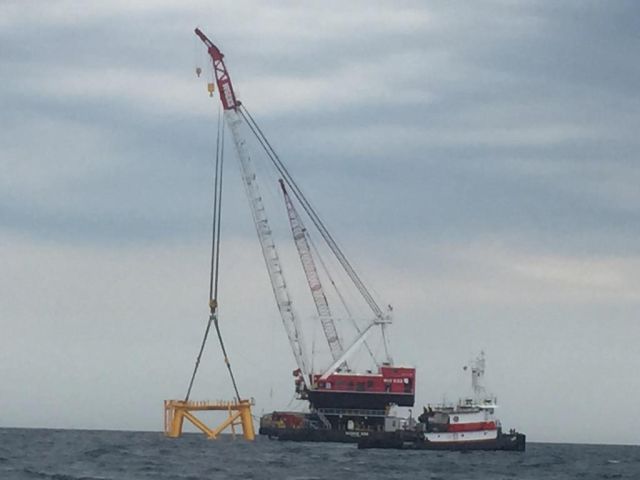 After a series of fits, starts, and court fights, the US finally has its first bit of offshore wind hardware in place. Earlier this week, a floating crane lowered the foundation for a wind turbine onto the ocean floor off the coast of Rhode Island. The hardware will eventually be part of the Block Island Wind Farm, run by a company named Deepwater Wind.

The company’s CEO tweeted the picture above as the foundation was lowered to the ocean floor by a floating crane. (Weeks 533, a barge-mounted crane, is the largest of its type on the East Coast.) According to the Providence Journal, the work isn’t done yet. Pilings will have to be driven through the base of the foundation before it’s ready to accept the strain of turbine.

Offshore wind is currently much more expensive than onshore, as building and securing the foundations costs more than the wind turbines. But offshore wind has a few significant advantages. Not only is the wind typically steadier and stronger than onshore locations, but it’s also easier to locate near major population centers.

In the case of the Block Island project, the work has a major ancillary benefit: the electrical interconnects to the wind turbines will be used to hook the island up to the grid on the mainland. This will mean the end of costly local diesel generators on Block Island.