Will the Port of Miami Pick Up New Business? 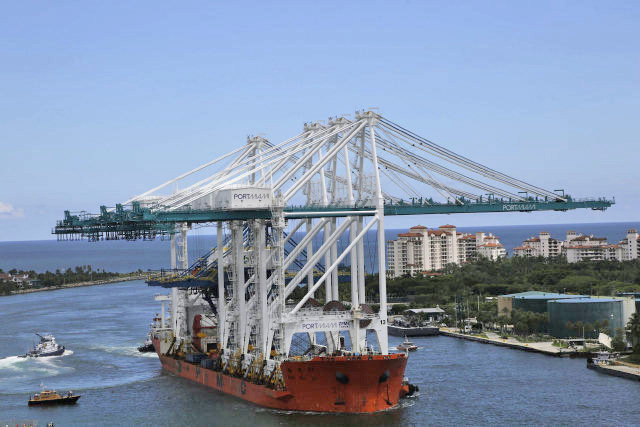 Arrival of giant cranes ushers in new era at PortMiami

Resembling giant metallic birds with their booms outstretched like wings, four super-post-Panamax cranes from China glided into Government Cut on Monday to prepare for the day when PortMiami welcomes some of the worldâ€™s largest ships.

The 262-foot-tall, fully assembled cranes were transported from an island off the coast of Shanghai aboard a special carrier and spent nearly three months at sea after storms around South Africaâ€™s Cape of Good Hope slowed their journey.

The cranes are part of $2 billion in port improvements aimed at doubling cargo traffic over the next several years and making the port ready for post-Panamax ships expected to call on PortMiami when expansion of the Panama Canal is completed in mid-2015.

As the cranes appeared on the horizon Monday, PortMiami Director Bill Johnson addressed a gathering of local politicians and dignitaries at the harbor pilotsâ€™ house.

But Savannah is still awaiting final legislative approval before it can launch its own dredging project.

With the improvements, PortMiami hopes to win back some cargo that now goes to Savannah and then moves down the Florida peninsula by ruck or rail to supply local markets.

The Panama Canal is maxed out and is undergoing a renovation to accommodate a new generation of post-Panamax ships that are too long, too wide and too heavy for its locks. Once those mega-ships begin traversing the canal, PortMiami wants to become a gateway port for them.

The planned dredging of PortMiamiâ€™s shipping canal to a depth of 50 to 52 feet means fully loaded post-Panamax ships will be able to call in Miami for the first time. Instead of ships loaded with 4,500 TEUs (a TEU is equivalent to a 20-foot container), PortMiami will be able to handle ships carrying 12,000 to 13,000 TEUs.

The $220-million dredging project is slated to begin next month and is expected to be completed around the same time the canal is completed.

But the portâ€™s crane fleet also needed an update to be big-ship-ready.

The new cranes, which are as tall as a 25-story building, collectively cost $39 million. They will be capable of reaching over 22 containers, compared to 13 containers for smaller cranes, to pluck cargo from a ship and will be able to reach containers stacked 11 high on deck.

The four new cranes replace three smaller cranes that PortMiami sold to the Port of Barranquilla, Colombia, and join two other super-post Panamax cranes at the port. The super-post-Panamax designation means the cranes can unload ships that are even larger than the ones that will transit the expanded Panama Canal.

â€œThe cranes are an important component in our growth strategy,â€ Johnson said.

Other parts of the port-improvement equation are a $915 million port tunnel linking PortMiami to the interstate highway system, strengthening wharves and bulkheads in anticipation of the deep dredge, and an on-port rail link between the port and The Florida East Coast Railway yard in Hialeah.

â€œThe post-Panamax era is near at hand,â€™â€™ Miami-Dade Mayor Carlos Gimenez said in a statement. â€œThe new PortMiami cranes represent an investment that ensures that we remain competitive in the global marketplace.â€™â€™

The four new cranes will be able to simultaneously unload a ship. â€œYou cannot be a big-ship port unless you can unload on a timely basis,â€™â€™ Johnson said.

The first two cranes, which were manufactured by ZPMC, are expected to be operating in three to four weeks, then final on-port assembly of the other two will begin.

The port has a long-standing relationship with ZPMC and this is the third crane order it has placed with the Chinese manufacturer. The first, back in 1993, was the first ZPMC fulfilled for a North American customer.

While Johnson was pleased with the price, some members of the arts community would have preferred the cranes had been painted pink to resemble a flamingo.

The port flirted with the idea but it would have required a change order and delayed delivery of the cranes, so it stuck with the original white and turquoise paint job. 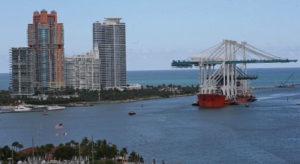 Four new gantry cranes floating to PortMiami on a slow freighter ship from China arrive Monday, October 7, 2013 via Government Cut. These super post-Panamax cranes are needed to unload the big ships that will begin to call in Miami after the expansion of the Panama Canal is completed in 2015. CARL JUSTE / MIAMI HERALD STAFF

“I won’t be needing one of those”