Home Industry News When it comes to the centimeter: RemoteDrive on the Liebherr compact crane proves itself in practice
Industry News 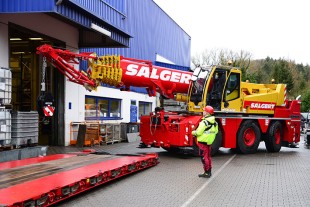 Last autumn, Salgert GmbH acquired the first Liebherr compact cranes LTC 1050-3.1 with RemoteDrive. Maneuvering with radio remote control has now proven itself even when used under the tightest of conditions in the production hall of a special aluminium die casting company in Bad Münstereifel.

During the preliminary meeting on site, it quickly became clear: this is going to be very tight. At an automotive supplier, several machine tools should be converted and introduced in a production hall. The perfect job for crane driver Tony Gölitzer and his new LTC 1050-3.1 with RemoteDrive. He explains: “The difficulty was that the machines should be moved in a narrow and low hall, where other machines are already standing and production is underway.”

Tony Gölitzer is one of the first crane drivers ever to operate a Liebherr LTC 1050-3.1 with the radio remote control for driving the crane chassis. When used in Bad Münstereifel, this Liebherr innovation was worth gold. Gölitzer says: “With RemoteDrive, I can position myself directly at the problem site and maneuver the crane safely through the cramped conditions. The hall gate was narrow and low and we had attached the short mounting tip. I had to look closely.”

The machine removal could be carried out quickly and without any problems. The variable support base VarioBase® was helpful in order to support the crane between the existing systems with only partially extended slide bars. In addition, the LTC’s ability to telescopically telescopic with the boom and to drive with load on the hook was needed. Gerd Müller, branch manager at Salgert, who is responsible for the organisation and planning of major projects and in particular for machine movement, is enthusiastic about the Liebherr compact crane: “With the LTC 1050-3.1, we can size classes. In today’s operation, for example, we had to trade machines weighing 6.2 to 18 tons. The LTC offers the possibility to cover everything, both the unloading of heavy machinery as well as delicate work in these cramped conditions. Another advantage of the LTC 1050-3.1 is that it can pass through gates of only 3 meters.”

The RemoteDrive function is a consistent further development of the Liebherr crane control LICCON2. Since its introduction 13 years ago, Liebherr cranes have been equipped with the BTT mobile control and display unit via radio remote control. The LICCON2 mobile crane control also offers the possibility of a simple extension for radio remote control of all crane functions of the upper car. In addition to the corresponding software in the crane, only one console with two master switches is required, into which the existing BTT is inserted.

What is new now is the crane chassis process. It is possible for the first time with the compact crane LTC 1050-3.1. In particular, fine-tuning between the remote control and the millimeter-precise implementation on the crane was a challenge for Liebherr engineers and software experts. Especially when every centimeter is important for bottlenecks, the safety of people, cranes and the environment is paramount. And this is exactly where RemoteDrive technology is setting new standards in coordination with the LICCON crane control system developed by Liebherr.

When it comes to the centimeter: RemoteDrive on the Liebherr compact crane proves itself in practice was last modified: March 9th, 2020 by Ron Selby
Liccon crane systemLiebheerremote drive