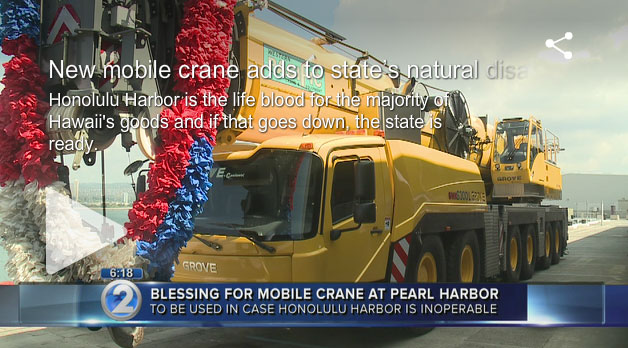 Honolulu Harbor is the life blood for the majority of Hawaiiâ€™s goods and if that goes down, the state is ready.

On Monday, the state, U.S. Coast Guard and U.S. Navy blessed a new Grove GMK6300L mobile crane at Pearl Harbor that will assist with cargo off-loading in the eventÂ a natural disaster renders Honolulu Harbor inoperable.

Securing the $3 million crane was a collaborative effort among the state of Hawaii, industry and port partners, and the U.S. military, and made possible with funding from a port security grant program.

â€œWhen they came here and we showed them around our ports and they understood the importance of the people and state, we would starve without these ports. We couldnâ€™t bring in enough things by air,â€ said state adjutant general Maj. Gen. Darryl Wong. â€œSo then they realized how important this was and they agreed to give us this grant.â€

Maj. Gen. Wong hopes to next get a crane ship ported in Hawaii, which could store a number of cranes in the state.