Welcome to the glamorous world of crane hire 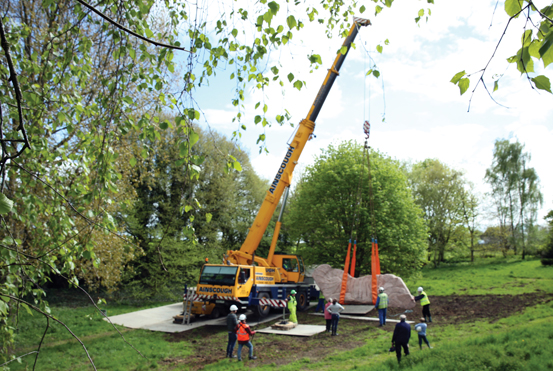 Cranes were given star billing in a recent BBC documentary series. But what did The Crane Gang really tell us about the crane hire industry? David Taylor reports

About 25 years ago, at the invitation of mobile crane manufacturer Grove Coles (long since gobbled up by fellow US manufacturer Manitowoc) I wrote about a small, but up-and-coming, crane hirer in Standish, near Wigan.

The three Ainscough brothers â€“ Martin, James and Brendan â€“ were building up the somewhat lacklustre crane hire company which they had inherited from their father. And they were buying mobile cranes like it was going out of style.

It was hard to see how they could justify, or even afford, such a spending spree. The yard was small and scruffy; the offices cramped and down-at-heel. Yard staff in dirty overalls wandered in and out of the office at will, pausing to engage the managers in light-hearted banter. There didnâ€™t seem to be an awful lot of work going on.

Ainscough back then seemed a world away from the highly professional, business like head offices of top crane hirers like Grayston, White & Sparrow, Hewden Stuart and Scott Greenham. In the mid-late 1980s these were the big corporate players and they were running big cranes capable of lifting 500t or more. They turned over millions of pounds every year with big, blue-chip clients like BP, British Steel and BNFL. Fast-forward a decade and how the landscape had changed. GWS swallowed Scott Greenham and was then itself swallowed by expanding services group Rentokil before being sold on again to Belgian group Sarens.

And although Hewden Stuart was still there, by the turn of the millennium, Ainscough was the force to be reckoned with in mobile crane hire. The company had a big fleet, a network of depots covering the whole country and was now highly visible. People saw the cranes on the road and began to recognise the name. The Ainscough brothers were smart, successful and rich.

Ainscough Crane Hire has remained the dominant force in British crane hire ever since. And now it has been paid the ultimate accolade by becoming the subject of a BBC fly-on-the-wall documentary series beamed into sitting rooms across the UK this autumn. Thanks to The Crane Gang, even your grandmother knows who Ainscough Crane Hire is.

But what, as a result of this television series, is the publicâ€™s perception of the crane hire industry?

The machines are undoubtedly impressive, and the work they do often awe-inspiring: lifting derailed freight carriages off a railway during a night-time possession, lifting a 100m-long lattice beam from the top of the 2012 Olympic Aquatics Centre in one pieceÂ (above); or placing a giant 25m-diameter cable carousel with millimetre accuracy onto a floating barge â€“ all jobs in which massive forces are balanced on a knife-edge; tasks which are fraught with risks that must be assessed and managed.

Even in travel order, lumbering down the inside lane of the motorway, one of Ainscoughâ€™s heavy cranes, with its retinue of support vehicles is an arresting sight. But what about the people who operate them? Surely the assembly, rigging, planning and execution of a lift with one of these multimillion pound behemoths must be the work of a team of elite professionals, highly qualified â€“ probably to degree level in maths or engineering â€“ and every bit as glamorous as the gleaming multi-axle crane itself. So who are they? Well, just ordinary blokes, it turns out. They are decent, kind, hard-working men â€“ the sort youâ€™d expect to find on any construction site. Make no mistake, in the crane business, Ainscoughâ€™s heavy crane team are the elite, but donâ€™t expect Tom Cruise in Top Gun trim. Think Johnny Vegas, with tattoos.

Theyâ€™re not engineers and they donâ€™t require a university education, nor even A-levels. But neither are they stupid; they are intelligent and resourceful and they know their stuff. â€œThereâ€™s no book to tell you how to do it,â€ explained the lift supervisor following the removal of the derailed freight wagons. â€œYou have guidelines but when youâ€™re out there in the field itâ€™s a different story. So you get your heads together, you sort it out â€“ and it comes off.â€ Watching the documentary, it was sometimes hard to reconcile these unpretentious, down-to-earth characters with the complex mind-boggling equipment they use and the breathtaking tasks they perform. A heavy crane operator is right at the top of the tree. According to Diane Mavin, manager of Ainscoughâ€™s biggest depot, in Hayes, Middlesex (and one of the few women to appear in the film) a heavy crane operator can, with overtime, earn in the region of Â£90,000 a year. But unlike the smaller cranes, the heavies donâ€™t operate within a local area â€“ they cover the whole country and where they go, the operator goes too.

The result is that these people spend weeks at a time away from home, often living in the most basic conditions. They get a Â£10 daily meal allowance â€“ fine in the provinces, but barely enough for two meals a day in one of the big cities, said one operator â€“ and Â£30 a night for accommodation. These sums are not arbitrary but are agreed with HMRC and exempt from tax.

But as top crawler crane operator Tristam Mayes pointed out to Ainscough commercial director Gareth Jones in one episode, finding a bed for the night is not always as easy as it sounds: â€œAll the managers, they get to go home every nightâ€¦.but weâ€™re still stuck out on site at midnight. If you finish at midnight, the last thing you want to do is find somewhere. I think Iâ€™ve had to sleep in my car about nine times,â€ said Mayes. â€œThatâ€™s no way to liveâ€. Another operator, newly-promoted to the heavy division, was shown in the film having to live for five weeks in his car while undergoing training 300 miles from home. Yet another travels to work with a caravan in tow, this being the only way he can be sure to find a bed for the night. None of this comes as any surprise to Leigh Sparrow. â€œCrane hire is different. It has always been different,â€ he says. General plant is easier to manage but to make cranes pay you have to run them like taxisâ€¦ If youâ€™ve got good dispatchers in the office theyâ€™re worth their weight in gold. A good hire-desk clerk will find three or four jobs a day for a crane and if youâ€™re charging, say, four hours minimum per job, you can make money.â€

Sparrow is crane-hire royalty: his father Gordon and uncles Alf and George founded Sparrowâ€™s Crane Hire in the 1950s and basically invented crane hire as we know it. Leigh Sparrow himself has experience not only of hire, but also manufacture and sales, having worked in marketing for Grove in the US. Today he owns and publishes the specialist trade magazine Cranes & Access. Despite the enormous investment these cranes represent, the owners seldom make a fat profit. Things are tough for crane hirers, as The Crane Gang showed when Gareth Jones chaired a tense strategy meeting with his management team.

But people are still drawn to cranes. Sparrow believes itâ€™s partly because, somehow, they are more glamorous than other plant. â€œYou get crane spotters like you get train spotters. You donâ€™t get that with access platforms, thatâ€™s for sure,â€ says Sparrow. This was nicely illustrated by The Crane Gang as it followed Tristam Mayes on holiday to Munich â€“ or more precisely, the Bauma trade fair â€“ where he was welcomed onto the Liebherr stand and had himself photographed in the cab of the German firmâ€™s latest monster crawler crane: â€œThere will be a lot of jealous people in the UK right now,â€ he told the film crew.

Itâ€™s not just the operators and â€˜anoraksâ€™ who become intoxicated with the glamour of cranes. Businessmen do too, says Sparrow. â€œA lot of people are in the business just for the machines,â€ he says. â€œThere are a lot of egos out thereâ€¦they like to see the cranes with their name all over them. Itâ€™s almost a pastime for them. They will buy the equipment on finance, make a little bit of money and then sell it on. They donâ€™t make a lot of money; most of them just get by,â€ he says. â€œThe fleet may be worth millions but they are living very frugally.â€ Though you couldnâ€™t help but warm to the all the characters who appeared in The Crane Gang, this contrast between the massive sums spent on capital equipment and the tough conditions endured both on site and in the boardroom seems hard to reconcile. Crane hirers have huge borrowings and while workloads are now picking up, Sparrow says hire rates (always a big bone of contention) â€œhave never been worseâ€.

Crane hire is, and always has been to some extent, a bit of a roller-coaster ride with big ups and big downs. The Ainscough brothers timed it just right, selling the business to a management buyout team for Â£255m in 2007, just before the recession hit. In 2011 the company posted a loss of Â£70m, having suffered along with the rest of the industry during the downturn. It was sold again in December 2012, to Goldman Sachs and private equity group TPG which is now battling to get the firm in back on a sound footing. Staying in business as a crane hirer, just like pulling off one of those tricky heavy lifts, is a delicate balancing act.

Letting the cameras in

Allowing a television crew in to film your business is a brave decision, but Ainscough commercial director Gareth JonesÂ (above)Â thinks it was a worthwhile exercise: â€œWhen we were approached by the production company, we thought it would be a good idea and overall we are pleased with how the show has told our story.

â€œLike anything where editorial rights are limited, there are parts we would have edited differently given the chance. But it was a documentary about real people and you canâ€™t control what people say when the cameras are rolling. â€œWe have had to take the rough with the smooth. â€œWhat is important for the whole industry is that it clearly illustrates the complexities that are associated with engineering, planning and expediting lifts and we hope that, as a result of the programme, there is now a much better awareness and appreciation of the work that is involved.â€

Welcome to the glamorous world of crane hire was last modified: November 22nd, 2013 by Ron Selby

Homeowners angry as cul-de-sac is blocked by a Crane