Watch a 1,717 pound pumpkin explode when dropped from a Telehandler 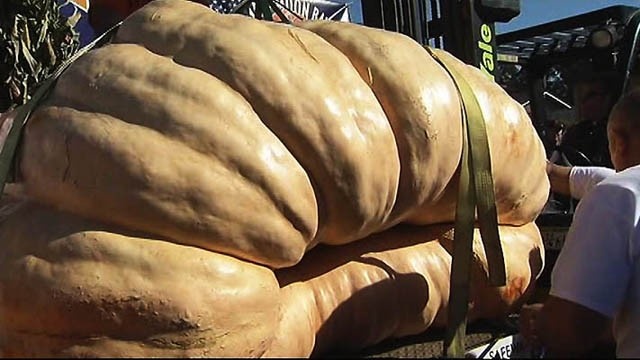 When a pumpkin is dropped onto the ground, it can explode.

That’s what happened when the folks at Cherry Crest Adventure Farm in Paradise Twp. dropped a 1,717 pound pumpkin from a crane, as part of its pumpkin festival.

You can watch the drop in the video here

The pumpkin was grown by Paul and Cheryl Fulk of Jackson Twp., who have been growing pumpkins for Cherry Crest Adventure Farm to smash for the past six years. This year was their second heaviest pumpkin ever (the current record is owned to a 1,744 pound monstrosity).

In order to grow a giant pumpkin, the Fulks grow the seeds inside starting on April 15, bringing the plants outside in the first week of May. The entire summer is spent taking care and nurturing the pumpkins.

“In the beginning of the season when it first grows you can see them grow from morning to night,” Cheryl Fulk said, with Paul Faulk chiming in that the pumpkins can grow 40 pounds in one night.

Next year the Fulk’s are hoping to grow a pumpkin that weighs 2,000 pounds.

Watch a 1,717 pound pumpkin explode when dropped from a Telehandler was last modified: November 3rd, 2014 by Ron Selby