Up, up and away: cranes chart Sydney’s high rise boom 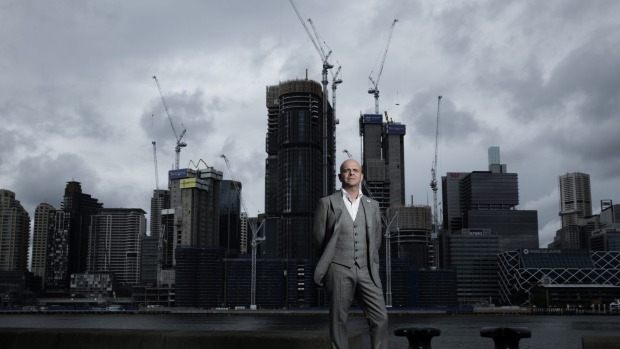 Sydney is the construction capital of Australia, whereÂ the number of cranes building high-rise residential towers doubledÂ in the last six months.

The crowd of cranes is the most visible indicator yet of aÂ housing boom that is transforming city skylines, Sydney’s most of all.

Some 76 new cranes have come onto Sydney residential sites in the last six months. With 15 takenÂ down, the number of cranes working itsÂ residential projects totals 123.

That isÂ almost exactly double the figureÂ of six months ago. The results are tallied byÂ aÂ crane indexÂ devised by quantity surveyors Rider Levett Bucknall as aÂ handyÂ gauge for the amount of residential and commercial construction under way.

In all, there areÂ now 426Â cranes at work on commercial and residential projects in Australia’s capitals, aÂ 31 per cent gainÂ sinceÂ September last year.

This week DeutscheÂ forecast record levels of housing construction to come over the next two years, with around half of all starts accounted for by apartments.

Â MelbourneÂ added 23 cranes net in the last six months, taking the total to 116. Residential-buildingÂ cranes are 75 per cent of the total, a little less than six months ago.

The boom is gaining pace inÂ Sydney, with new projects suchÂ as theÂ Belmont Wharf Apartments and theÂ HomebushÂ Grand Central Apartments. Residential projects account for three-quarters of the cranes now at work there. Six months ago it was closer to half.

Lend Lease has 11 cranesÂ on itsÂ BarangarooÂ South project. Not far away, at Darling Harbour, itÂ has anotherÂ sevenÂ cranes for the new convention centre.

Construction on the Darling Square apartments begins soon. Combined with Barangaroo, the two projects will deliver almost 700 apartments in the next two years.

“”Lend Lease currently has a backlog of 11,000 apartments across Australia;Â  we are capitalising on the strongÂ demand and continued strength in the residential apartments market,Â particularly in Sydney,” said Tarun Gupta, chief executive for property inÂ Australia.
Up, up and away: cranes chart Sydney’s high rise boom was last modified: April 29th, 2015 by Ron Selby