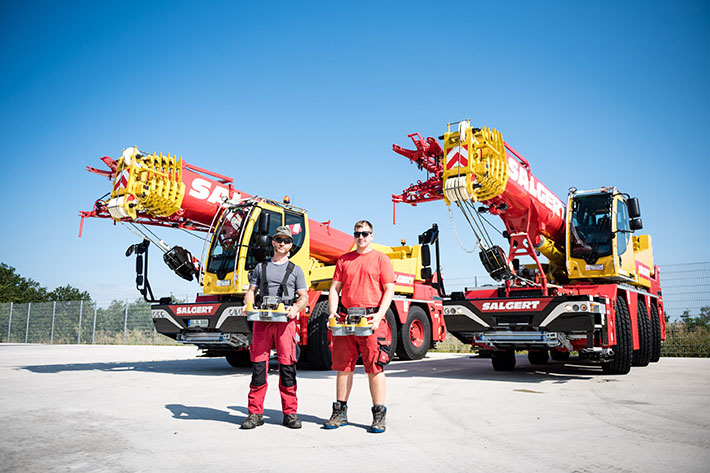 Salgert GmbH took delivery of two new Liebherr LTC 1050-3.1 compact cranes. These are the first cranes to feature RemoteDrive. A control desk enables the operator to maneuver the crane from outside, a massive advantage on constricted sites.

At its 2018 customer days in Ehingen, Liebherr presented a prototype for controlling the LTC 1050-3.1 by remote. However, it did not control the crane movements as they have long been part of standard operations. The new feature enables the whole vehicle to be controlled from outside the cabin. And once again, it enhances safety and convenience because the crane operator has a better view of the problem areas on the site.

Wolfgang Salgert, Managing Director of Salgert GmbH, was one of the first people to order this new technology. “I have been looking for a way of controlling our LTC compact cranes by remote for many years. They perform 70 percent of their work in constricted industrial buildings. This means that we face situations every day where the crane operator cannot see the whole picture. RemoteDrive enables the crane operator to stand in front of the crane and maneuver it safely through constricted access routes”, says Salgert to explain his decision.

Many owners have told the Ehingen-based crane specialist that they could really use a remote control on their cranes several times per week. It makes sense when moving the crane on the site, for maneuvering on constricted sites and for driving the crane inside industrial buildings. And the vast majority of them also regard the remote control for their mobile crane as a better idea than camera systems because they only supply an image of the constricted area to the cab. RemoteDrive takes the operator to areas with difficult access.