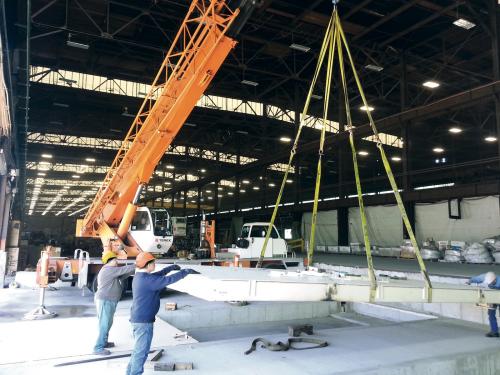 Since they are not a high-volume category, manufacturers do not replace models as quickly as in other machine categories, but that hasnâ€™t stopped technological advancements. At their core, truck cranes need to be manueverable workhorses for various types of lifts in a myriad of situations, but technology is there, too.

â€œThe TMS9000E is indeed a one-man machine,â€ says Jon Lanse, operations manager of the C.P. Wardâ€™s crane/rigging division. â€œWe can have the same person drive the crane to the job site, set it up for lifts, and then act as the operator.â€

On a recent cell phone tower project, Lanse says the craneâ€™s manueverability and reach capability enabled the company to complete a job it otherwise could not have handled.

â€œFor this particular job in Buffalo, I was putting up cell phone towers with the crane,â€ Lanse says. â€œThere wasnâ€™t much room to work in; I had to set up the crane inside of a fenced-in compound.

â€œThe crane enabled me to maneuver into this area and still have enough reach with its 142-foot boom to lift to the top of the towers. And even with this kind of position, the crane had a strong enough load chart to make the lifts.â€

C.P. Ward was also attracted to the craneâ€™s technology offerings, such as its remote control system.

â€œWith the remote control system, we can swing the boom and the luffing jib in place for pinning on the boom,â€ Lanse says. â€œThe operator is on the ground watching and making all of the connections. We donâ€™t need two operators to head out with the crane to complete a simple job.â€

The company says its long telescopic booms are a benefit for assembling prefabricated components, such as the large concrete panels that form walls for factories, other industrial buildings, and even big box retail stores.

Link-Belt produces a 7-machine line of hydraulic truck cranes with capacities from 40 to 110 tons. The 40-ton unit, the HTC-8640 features two fly options with three offset positions of 2 degrees, 20 degrees, and 40 degrees. â€œStow nâ€™ Goâ€ outrigger pontoons can be easily secured for transport, and a pull-out CabWalk aids access to and from the operatorâ€™s cab.

â€œRoad regulations vary considerably across states, so depending on an ownerâ€™s territory, the truck needs to be easily transported from site to site,â€ Nesdahl says. â€œAs taxi cranes, truck cranes are sent out on a variety of applications and need to have the flexibility for various liftsâ€”this means strong capacity across the lift chart. Maneuverability is also key, and cranes need to be reliable to reduce downtime costs.â€

Harrison Hipple, product manager, AT and TMS, Manitowoc, also singles out transportability. â€œFor a truck crane, gross vehicle and axle weights are critical, and the allowable weights vary significantly between and within states and provinces, as well as by seasons,â€ he says.

â€œIt is important to have multiple counterweight splits and removable parts to meet diverse roading regulations.â€

Safety also has been a design trend, with manufacturers citing easier cab and maintenance access and corrosion-protected components as key features.

â€œManitowoc is introducing several differentiating features and operating aids in our products, including access platforms, cameras, and our Crane Control System,â€ Hipple says.

The Crane Control System (CCS) is a standardized user interface that provides a common operating platform across multiple product lines. In the Manitowoc portfolio, that ecompasses a lot of models.

Each CCS unit features the same control layout, including a jog dial and central display with standardized symbols. There are only seven major components that make up CCS, simplifying service and maintenance. The seven components are: crane controller, safety controller, small IO (input/output), large IO, joysticks, jog-dial and display. Each can be easily replaced if necessary, or even switched from another machine for the purposes of completing a job, the company says.

â€œThe benefits of standardization are clear and weâ€™ve been applying the principle to many areas of our engineering design, including counterweights, engines, drive systems, boom and jib options,â€ says Jens Ennen, SVP of all-terrain and truck cranes at Manitowoc, and also the companyâ€™s global head of engineering.

â€œIts ergonomic layout means the operator no longer needs to stretch for controls to complete operations because everything is in reach,â€ Ennen says.

â€œPlus, for fleet owners with multiple Manitowoc products, moving operators from one machine to another is a seamless process,â€ Ennen says. â€œAnd because the parts are common, owners can keep smaller stocks while the servicing and maintenance is standardized and also much simpler.â€