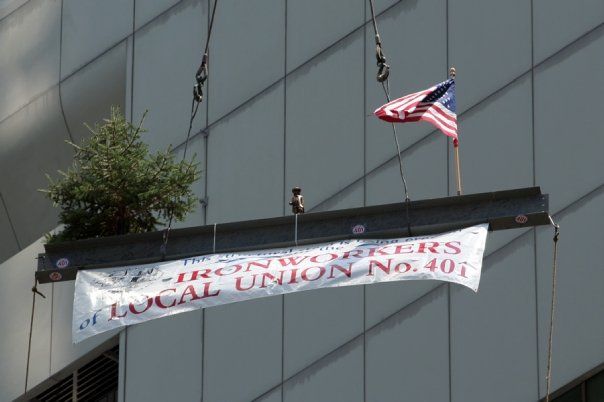 Dougherty, 72, is the former financial secretary and business manager of Ironworkers Local 40. He has been charged with a host of offenses that include conspiracy, violent crime in aid of racketeering, arson, destruction of property, assault and related charges. If convicted of all charges he faces a mandatory minimum term of 35 years in prison up to a statutory maximum of 130 years. He has pleaded not guilty.

Federal prosecutors allege that some union members were organized into â€œgoon squadsâ€ and used threats, sabotage and intimidation to force non-union contractors to hire Local 401 members.

Former union boss Joseph Dougherty, 72, has pleaded not guilty of the charges of RICO conspiracy, violent crime in aid of racketeering and related offenses

Federal prosecutors also allege Dougherty not only knew of the goon squads, some of whom referred to themselves as T.H.U.G.â€™s or The Helpful Union Guys, but authorized their activities. Of the seven other people indicted; business agents Edward Sweeney, Francis Sean Oâ€™Donnell, Christopher Prophet, William Oâ€™Donnell, and union members James Walsh, William Gillin, Richard Ritchie, Daniel Hennigar and Greg Sullivan, Dougherty is the only one who has not pleaded guilty in the case. Some of the defendants are expected to testify against their former boss in the lengthy trial which is expected to last several weeks.

â€œWhile unions have the right to legally advocate on behalf of their members, my office will not tolerate the conduct of those who use violence to further union goals,â€ said United States Attorney Zane David Memeger. â€œUnion officials and members who commit arson, destroy property, use threats of physical harm, and engage in other acts of violence to extort victims on behalf of their union need to be criminally prosecuted.â€

Memeger said the defendants had a solid reputation for using violence to achieve their goals that had been built up over decades. Investigators said that among the acts of sabotage allegedly committed by the union was the arson of an under construction Quaker Meetinghouse in Dec. 2012.

Allegedly, the contractor refused to hire union iron workers and union members went to work. The site, which was located at 20 East Mermaid Lane, was vandalized when the crane was set on fire. Steel beams and bolts were cut.

Members of Local 401 picketed a construction site near the King of Prussia Mall between May and June of 2010 when another contractor didnâ€™t comply and hire union workers. It is alleged that Ritchie and three others later resorted to violence when they assaulted some of the non-union workers with baseball bats. In July 2013, allegedly under Doughertyâ€™s direction, the defendants set up a picket line and allegedly threatened the contractor of an apartment complex under construction at 31st and Spring Garden streets, if he did not hire Local 401 members. According to the indictment, the contractor gave up his profits and turned the job over to a union-affiliated contractor.

Federal prosecutors are expected to present evidence concerning the Spring Garden Street construction site that involves a conversation between Dougherty and Sweeney that happened on or around July 13, 2013. The two men allegedly agreed to extort the contractor who at one time offered to hire one union worker and a second proposal to hire two. Dougherty allegedly said to Sweeney that even one piece of a job being handled by non-union workers was too much.

Special Agent Ed Hanko said when the indictments were handed down that the investigation is far from over.

â€œThe strong-arm tactics we have seen in this case are outrageous and brazen, and an unfortunate blow to the worthy intentions of unionism,â€ Hanko said. â€œThe fight for workersâ€™ rights may sometimes call for tough tactics, but violence, intimidation, arson, and sabotage are crimes which wonâ€™t be tolerated. This investigation has been wide-ranging, but it is far from over. We expect to hear from more victims and will aggressively pursue all other leads we receive.â€