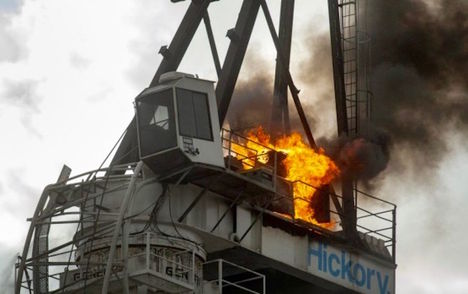 A tower crane jib came down at a site in the Prahran suburb of Melbourne, Australia today following a fire in the crane engine compartment.

The crane was working on site of the â€˜The Parqueâ€™ apartments when the incident took place this afternoon. It is understood that the engine and surrounding hoses and wiring caught fire fire and quickly spread through the superstructure causing the jib pendant cable to fail and the jib to drop.

Footage shows the dramatic moment the craneâ€™s jib came down almost an hour after the fire was reported, damaging cars parked on the nearby street.

12 construction workers were evacuated from the site and no injuries were reported. Metropolitan fire crews were quickly on site to extinguish the fire and are checking that all flames have been extinguished before dismantling can begin.

It would appear that an electrical fault was the cause of the blaze and collapse of the craneâ€™s jib. Melbourneâ€™s Metropolitan Fire Brigade has investigated the wreckage and found an electrical short in the battery terminal circuity.