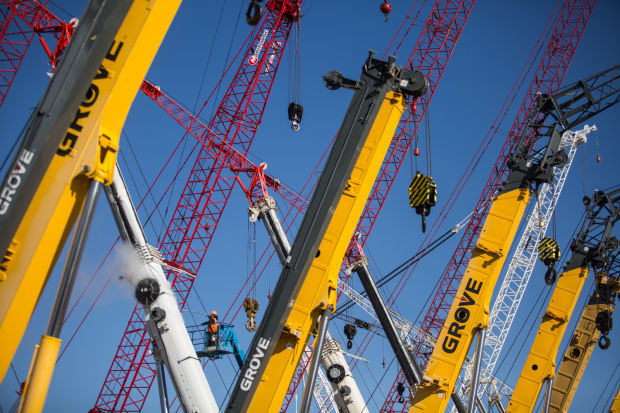 With the cost to lease a construction crane sometimes at thousands of dollars a day, is there an opportunity to buy a crane, then lease it out to builders of condo high rises and commercial buildings? Â Does the math for crane rental make sense? Â The answer is yes, but it requires a fairly deep understanding of how construction projects work and finding an area that is not saturated with competitors.

Many people are familiar with tower cranes; these are the tall cranes used to build high rises and other buildings. Â They can lift 200 tons or more hundreds of feet into the air. Â When cities are going through a high rise boom period, like Miami and Austin recently, people joke that the the crane is the new state bird. Â There are a variety of other types of cranes that may not gain as much notoriety, but nonetheless serve important roles in construction projects and rent for hefty sums. Â These would include hydraulic truck cranes, wheel-mounted cranes, crawler-mounted cranes and straddle booms. Â While none of these command the lease rates of the tower cranes, they still lease for hefty sums. Â For instance, a 90-Ton Hydraulic Truck Crane leases for $10,500 per week (with an operator included) according to this price sheet from C&S Crane & Rigging.

When people are renting a crane on an hourly, daily, or even weekly basis, they are not typically going to have their own operator who is capable of operating the equipment. Â The lease rates typically include an operator. Â So if you were bought a crane and wanted to lease it out, you would probably need to have an operator you could hire for the job and include it in your lease price. Â Places to look for an operator would include the local crane operators union, such as the International Union of Operating Engineers or local crane operator training and apprenticeship programs. Â If this is not a full-time business and your crane is not constantly being rented, you would try to hire one on a job-by-job basis.

Basic used truck cranes can cost as little as $35,000 and go up from there. Â Many of the cranes being used for large commercial projectsÂ cost over $500,000 and tower cranesÂ could easily cost $700,000 up to $3 toÂ $4Â million. Â Buyers of used cranes definitely look at the amount of carrier hours that the crane has already experienced and whether the crane has its safety certification. Â Another factor is transportation. Â Since transportation is extremely expensive, ideally an owner of a crane is going to locate it in an area where there is demand. Â It does not necessarily have to be a New York or Miami type of market with high rises (although those types of markets are the right fit for certain types of cranes like hammerhead tower cranes and flat top tower cranes). Â Even smaller markets like Columbus, Georgia, or Sioux Falls, South Dakota, are going to have some demand for cranes, albeit smaller ones that can build a 3 or 4 story building rather than a high rise. Â Finding the right market with a lack of competition, then buying the right type of crane, are critical decisions if you want to make good money on crane rental and not have a crane that is usually idle.

A New Mobile Crane, Both Outdoors and Indoors