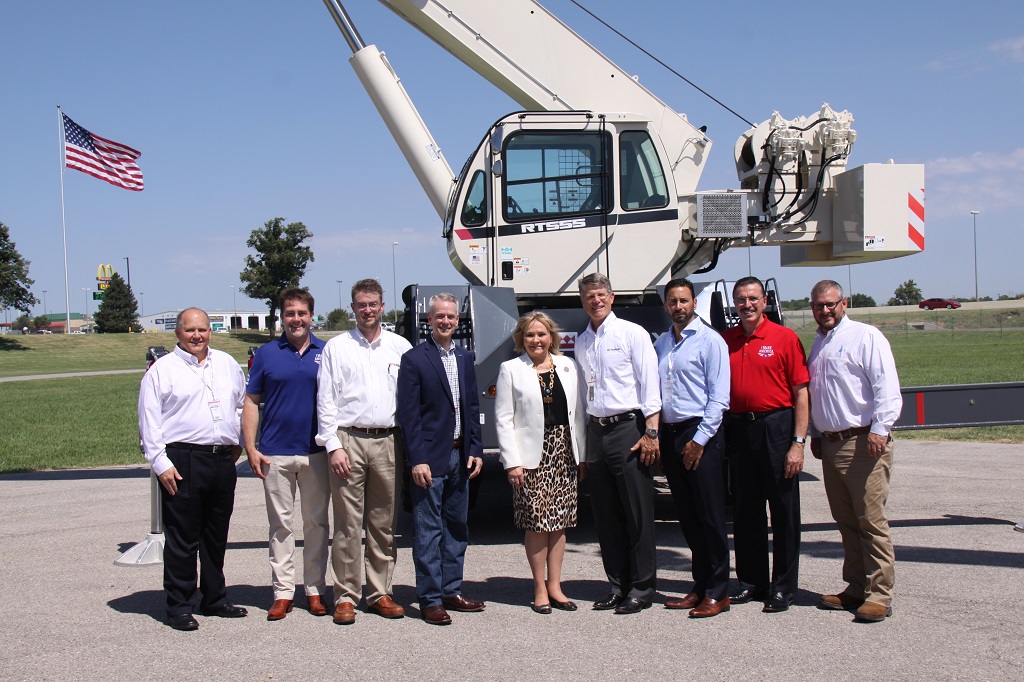 Oklahoma Governor Mary Fallin and Representative Steve Russell visited Terex’s facility in Oklahoma City, Okla., to talk about manufacturing jobs in America. They were joined by John Garrison, CEO and president of Terex Corp., and Dennis Slater, president of the Association of Equipment Manufacturers (AEM). The visit was part of the “I Make America,” event that is co-sponsored by AEM and Terex.

Terex was chosen for this visit because it recently moved a significant portion of its manufacturing operations to its plant in Oklahoma. The state-of-the-art facility boasts 700,000 square feet of operational space. Over the past two years, Terex has invested over $40 dollars into the facility, including the renovation of a large-scale training center and quality-of-life improvements like atmospherically-tuned fans to keep team members cool. It is now the only Terex facility in the world capable of producing heavy equipment for all three segments cranes, aerial work platforms, and material processing.

“You know what I like about this place?” Rep. Russell said. “You don’t just make stuff. You make stuff that makes stuff.”

After the tour of the Terex facility, Gov. Fallin and Rep. Russell attended a rally in the new training center, where they were able to speak to all team members. During the question and answer period, one of the team members asked Gov. Fallin what can be done about workforce readiness in the State of Oklahoma – and beyond.

“Manufacturing is not what grandfather’s manufacturing was,” Fallin said. “If you want to go into a nice company like this, you have to have some education and training and some work skills to get a job here.”

Fallin said the nation must do a better job in providing the right work skills for today’s jobs. She said the solution is filling the middle skills gap. She explained that the middle skills gap is where a worker needs additional training beyond a high school diploma, but not a full college degree. She stated that by 2025, 77 percent of all American jobs will require additional education beyond high school.

Russell said the Terex team members were proving the fact that there are jobs out there for people who want to learn the skills. Terex takes team member training seriously, and it shows.

John Garrison, CEO and president of Terex, echoed these sentiments. “Oklahoma City has really been the beneficiary of our focusing efforts,” he said. “We’re focusing our portfolio. We’re growing our business here. It’s a very important facility to Terex.”

Regarding the event, Garrison applauded team members at the Oklahoma City Terex facility. “Hats off to the OKC team,” he said. “The congressman said that ‘this team has got a lot of spirit. You can tell they’re engaged in the work they’re doing.’ With that kind of attitude and spirit, I’m absolutely confident that our team at OKC will continue to deliver for our customers.”