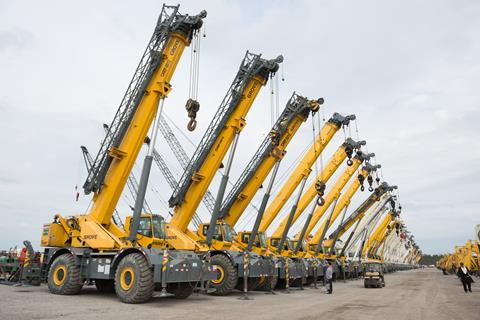 WASHINGTON, D.C., March 18, 2019 – With tariffs continuing to take a toll on U.S. businesses, farmers, communities, and families across the country, a new report by IHS Markit released today outlines the impact of tariffs on the equipment manufacturing industry and the broader U.S. economy.

“This report shows that tariffs continue to take a toll on U.S. equipment manufacturers, who will pay significantly more to manufacture equipment in the United States in the coming years,” said Dennis Slater, president of the Association of Equipment Manufacturers (AEM). “Tariffs on steel, aluminum, and Chinese imports, as well as the potential for additional tariffs, are driving up the cost of production, delaying capital investments, and impeding job creation for our more than 1,000 member companies.”

“While we agree with the Trump administration’s concerns regarding China’s unfair trade practices, including weak intellectual property protections, restrictions on foreign investment, and policies that limit competition, tariffs only hurt America’s businesses, workers, and families,” said John Garrison, chairman of the board, president and CEO of Terex Corporation and AEM board member. “We urge the Trump administration to negotiate solutions to these long-standing issues with China, de-escalate economic tensions, and remove broad unilateral tariffs.”

The report, “The Economic and Industry Impact of Protectionism Tariffs on the Off-highway Equipment Sector,” estimates the impact of the Trump administration’s Section 232 and Section 301 tariffs. Several of the report’s key findings speak to the significant, long-term impact on the U.S. economy, including:

• Placing tariffs on about $265 billion of imports will hurt the U.S. economy, largely from the direct effect of higher prices, yielding average lost GDP of $29 billion a year for 10 years.
• The effect on employment is negative; the tariffs will suppress domestic job gains by 260,000 over 10 years.
• Consumers will pay higher prices and reduce their real spending by $23 billion per year throughout the forecast horizon (ending in 2027).

Equipment manufacturing executives have attributed the increasing costs of manufacturing in the United States to the Trump administration’s tariffs. In fact, Tariffs Hurt the Heartland – a campaign backed by AEM – found that the Trump administration’s tariffs are costing businesses up to $2.7 billion each month and have caused exports of American products to plummet by 37 percent. Tariffs Hurt the Heartland has also issued state impact reports for several states, including Wisconsin, Pennsylvania, Ohio, Michigan, and Indiana.

There are currently tariffs on $250 billion dollars’ worth of imports from China as a result of the Trump Administration’s use of Section 301 of the Trade Act of 1974. This amount equals half of the total amount of goods imported into the U.S. from China in 2017.

Separately, Section 232 tariffs or quotas on steel and aluminum imports have raised the cost of manufacturing equipment in the United States. Equipment manufacturers need free and fair trade, but as a result of tariffs they are currently at a competitive disadvantage in the global marketplace.