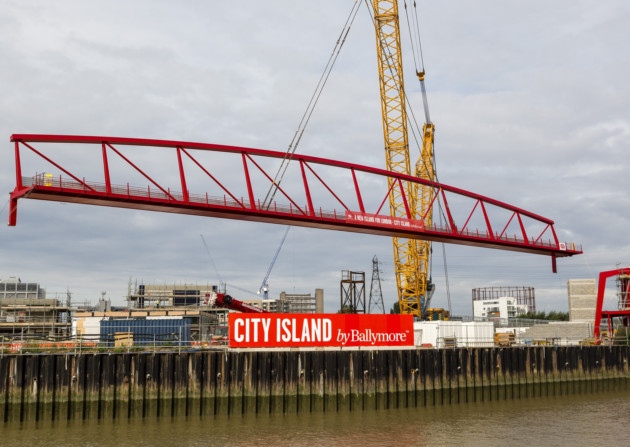 East London got its newest river-crossing yesterday when Britainâ€™s tallest crane appeared on the banks of the Lea.

The 600ft high crane, ther tallest in Britain, lowered a footbridge into place linking both sides of the river at Leamouth where a massive â€˜island cityâ€™ complex is under construction.

The development is on a meadering bend in the river close to where it joins the Thames at Bow Creek.

But until now this isolated corner of east London where a complex of office towers, apartment blocks, shops, restaurants, cafÃ©s, arts centre and gallery is being built has had only one way in and out.

Thatâ€™s the busy A1261 Lower Lea Crossing linking Canary Wharf and Poplar in the west to the Royal Docks in the east.

It is just a minuteâ€™s distance from Canning Town station on the Jubilee Line and DLRâ€”but thatâ€™s the other side of the river and there would be no way of reaching it apart from a long, 20-minute roundabout walk along busy traffic routes.

So Ballymore developers are adding the iron footbridge to connect their massive Island City complex to Canning Town.

The site is still a long way from completionâ€”but for the moment the crane drew the crowds yesterday to see the river crossing lowered into place to joining both sides of the Bow Creek. 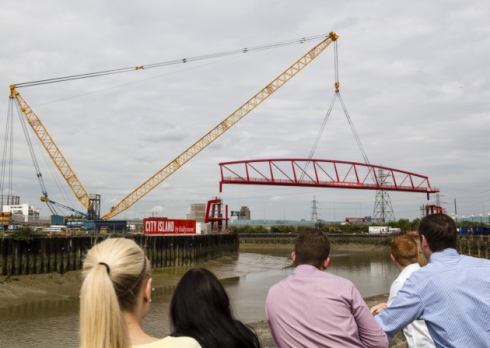