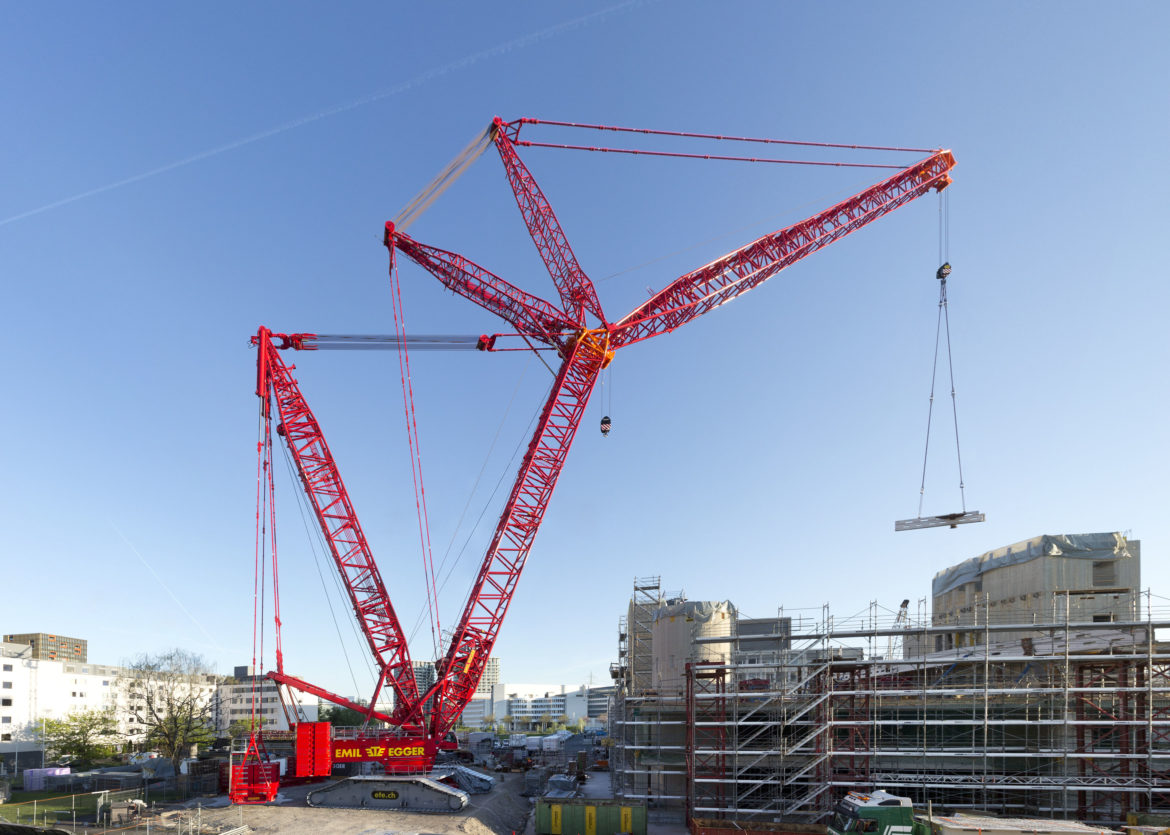 Emil Egger AG, a a transport and heavy haulage contractor based in Sankt Gallen, Switzerland, recently received a 1,000-tonne Liebherr LR 11000 lattice-boom crawler crane. Prior to receiving the crane, the Swiss company had never a crane with this much load capacity, and until now, Emil Egger’s crane fleet only had mobile rubber-tired cranes.

The LR 11000 first project is in Zurich, where it will work for six months assembling large reinforced concrete supports up to nearly 60 tonnes and facade components weighing 90 tonnes.

Liebherr’s VarioTray detachable counterweight system provides advantages for the crane in this initial application. If the entire counterweight is not required for a lift, the center section of the suspended ballast weighing up to 160 tonnes can be bolted out and used separately. This innovation is ideal for the construction site in Zurich, as the LR 11000 needs to lift supports with weights from 25 to 58 tonnes alternately over small and large distances. For the heavy components and large radius, the ballast plate is bolted on before luffing down the boom. 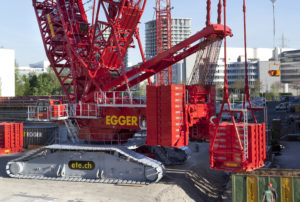 “The flexible options of the VarioTray entail cost benefits and save a huge amount of time for the otherwise tedious ballast installation and removal,” said Michael Egger of Emil Egger. The VarioTray also eliminates the need for a permanently stationed setup crane, which would have been problematic on the limited construction site area in Zurich.

“The substrate is so poor here that we had to drive piles more than 40 meters into the ground where the crane was to be set up for static reasons,” Egger said. He initially considered a crane with ballast trailer for this order, but the ground pressure would have been much higher below its wheels than underneath a conventional crane. He said the VarioTray spared the company from having to create an expensive concrete plate to transport the counterweight.

The LR 11000 is primarily designed for infrastructure projects, such as bridge building or large construction assemblies, and Emil Egger expects the crane to be used in these applications, as well as abroad to erect wind turbines.

US contractors expect demand to drop in...