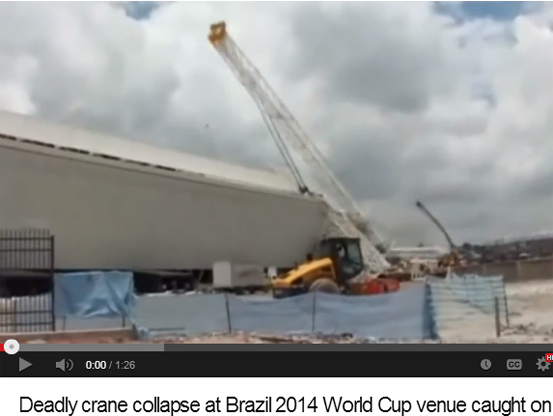 SAO PAULO – A safety engineer at the World Cup stadium where a giant crane collapse killed two workers allegedly warned his supervisor of possible problems with the operation, only to have his concerns brushed aside, a labour union leader charged Thursday, as sniping over the accident heated up.

The incident has fed worries about Brazil’s capacity to host next year’s showcase tournament, as well as the 2016 Olympics, though authorities insist they will be ready for both.

Sao Paulo’s Arena Corinthians was slated to be completed by the end of December, and workers have suggested that speed was a top priority on the construction site, with many working 12-hour shifts and skipping vacations.

The stadium was initially scheduled to be part of the Confederations Cup earlier this year, but world football’s governing body FIFA scrapped the venue from the warm-up tournament because of financing problems before construction even started.

Antonio de Sousa Ramalho, president of Sao Paulo’s civil industry workers’ association, told The Associated Press in a phone interview that supervisors pressed ahead with the operation to finish the roof despite several rainy days that soaked the soil. He said the engineer warned his supervisor that it appeared the ground was not stable enough to support the 500-ton piece of roofing.

“To his surprise, he was told by the supervisor that nothing was wrong and work should continue,” said Ramalho, who declined to provide the worker’s name for fear of possible reprisals. “They discussed the matter for a while but in the end the supervisor’s decision stood.”

Odebrecht, the powerful Brazilian construction company behind the stadium project and three other World Cup venues, strongly denied the claims, and a civil defence official said an initial inspection of the construction site a day after the accident showed no evidence the ground was unstable.

“Odebrecht and Sport Club Corinthians clarify that there was no warning previous to the accident,” the statement said. The company added that Ramalho’s union does not represent most of the workers involved in the crane operation.

Following a visit to the site Thursday, the civil defence official in charge of the inspection said there were no obvious signs that the ground was unstable.

“When we looked at it, it didn’t seem like the ground shifted, maybe just a few millimeters,” Jair Paca de Lima said in a television interview. “Maybe after an analysis with the equipment we will know more.”

According to Brazilian media reports, investigators are also looking into human or mechanical error as possible reasons for the collapse.

Lima said only the area where the accident happened will remain closed, but work can resume at most of the stadium as soon as Monday, when a three-day mourning period ends. Constructors will be allowed to clear the crane and the metal structure after getting clearance from civil defence authorities, which is expected to happen soon.

The labour ministry later Thursday said constructors were prohibited from using the other nine cranes at the site until they can show “safety measures are in place and there is no more risk of accidents.”

Ramalho, the union leader, said workers had been pulling long hours for quite some time in an effort to get the stadium completed on time, a point confirmed Thursday by loader Sergio Almeida, who told the AP typical shifts were 12 to 13 hours long.

Besides the Sao Paulo stadium, Odebrecht was involved in construction of the Fonte Nova stadium in Salvador and the Arena Pernambuco in Recife, both of which were delivered for this year’s Confederations Cup. It also renovated Rio de Janeiro’s Maracana Stadium, which will host the World Cup final.

A small part of the roof at Arena Fonte Nova collapsed in May from weight of accumulated water from heavy rainstorm. At the time, officials denied any structural problems with the project and blamed a mistake by a worker who inspected the roof.

FIFA said earlier Thursday it was waiting to learn more about the extent of the damage from Wednesday’s accident. FIFA officials and other global soccer personalities are due in Brazil next week for the high-profile World Cup draw in the resort city of Costa do Sauipe.

FIFA leaders have said repeatedly that there is no Plan B for next year’s tournament â€” particularly since nearly 1 million tickets to the matches have already been sold.

“It is too premature to make any detailed assessment on the situation of the Corinthians Arena as we are still awaiting the technical report to be able to evaluate the scale of the damage,” FIFA said in a statement sent to The Associated Press. “We will be able to provide an update earliest next week following the FIFA Organizing Committee of the FIFA World Cup.”

Jose Maria Marin, the president of the local World Cup organizing committee, said he lamented the accident but was confident it would not significantly affect the opener in Sao Paulo on June 12.

“I’m certain that the stadium will be ready for the start of the World Cup,” he told Brazilian media.

Supervisor was warned crane was on unstable ground in Brazil (Live video of Collapse) was last modified: December 2nd, 2013 by Ron Selby