Sterett Crane and Rigging sets the first piece of a 8,000-pound piece sculpture. 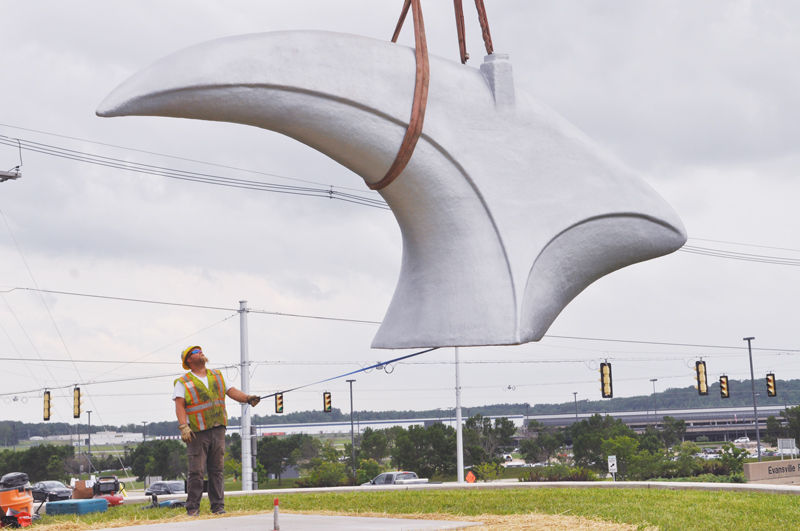 Friday, employees withÂ  Sterett Crane and Rigging set the first piece of Zadasnyâ€™s sculpture atop the Gateway Memorial, a project that began four years ago through Keep Evansville Beautiful. He said he knew his sculpture was a likely candidate for the when he saw an artist rendering of the proposed memorial.

â€œThe Keep Evansville Beautiful people came up with an idea to enhance the Evansville region and make it more attractive to tourists who come here and the residents to enjoy their city,â€ Zasadny said. â€œThey came up with something for the gateway area and along the major highways coming into town. They came up with the welcoming wall and wanted to put a sculpture on top of that â€¦ I found out about it and submitted a design and, eventually, it was accepted as one of the eight that were chosen. Through a narrowing down of the competitors, I was one of the four, then two and then the decision was made March of last year to select mine as the winner.â€

The sculpture weighs more than 8,000 pounds, and spans 21 feet. Despite decades of experience as a sculptor, Zadasny said Aerial Beauty was his largest project and will set the bar higher when he considers future projects.

â€œThis is really a first for me. Iâ€™ve had some large sculptures, nine or 10 feet tall, but Iâ€™ve not had anything this massive and I donâ€™t know if I ever will again. Now that Iâ€™ve accomplished this, I will set my goals higher and try for bigger … They say something like 145,000 people a year come through the airport terminal. When I think of those people, who come from all corners of the world, I really hope it will leave a lasting impression that they were in a special place.â€