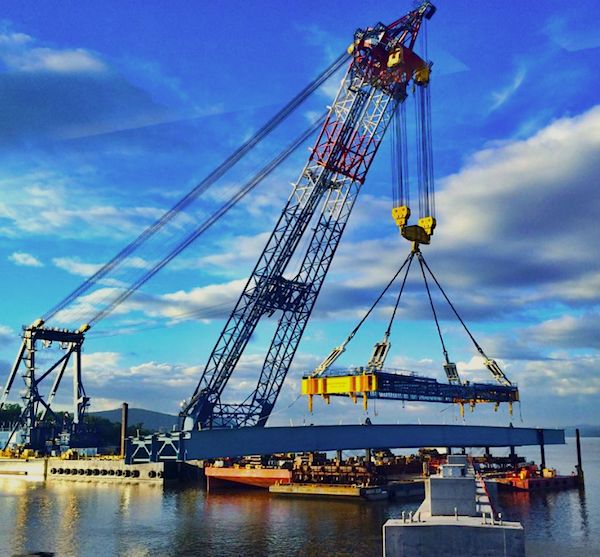 The first 12â€™ tall, 400â€™ long section of structural steel for the new Tappan Zee Bridge was maneuvered into place on Wed June 17 by the â€œI Lift NYâ€ supercrane. The steel work will support the road deck of the New NY Bridge.

The individual steel girders, weighing up to 1,100 tons each and totaling 31 miles in length before assembly, are assembled upriver at the Port of Coeymans in Albany County and then barged to the project site.

The larger-than-life engineering effort on the river has been snarling traffic on the old TZB while travelers rubber neck to see whatâ€™s going on down below â€” and up above â€” the Hudson River.

Every aspect of the new bridge is huge and the welded plate girders are no exception. They vary in length from 60 to 120 feet weighing as much as 105 tons. If this steel work were laid end to end, it would stretch from Nyack past the Statue of Liberty. Each piece of steelwork will be fastened by large eight-inch high strength bolts, each of which is one inch in diameter.

Sterett Crane and Rigging sets the first piece of a 8,000-pound piece sculpture.