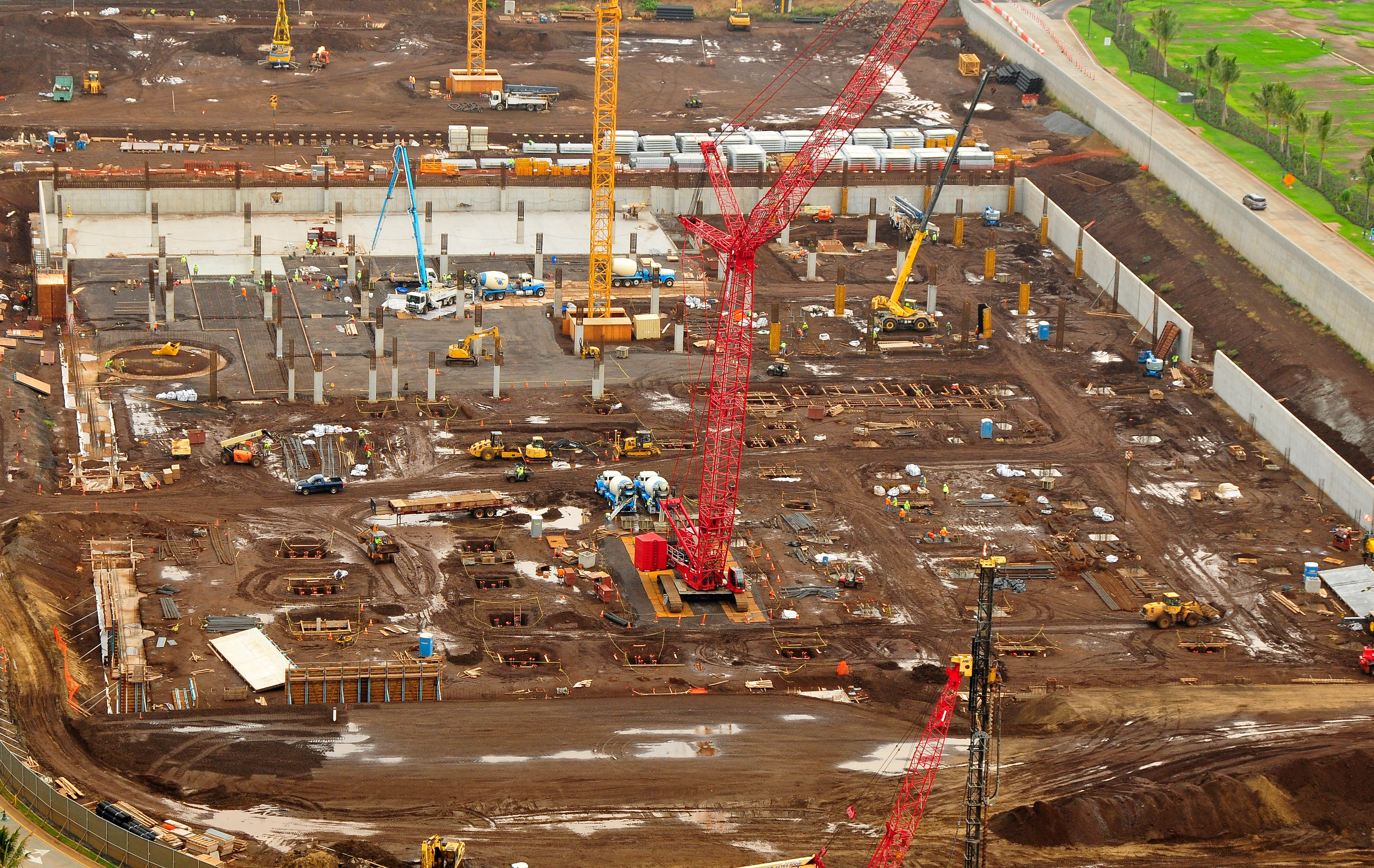 Over the last few weeks, Crane Network News has highlighted construction projects featuring cranes across the country on its Twitter, LinkedIn, Facebook, and Instagram accounts. Here’s a recap of cranes at work across the United States. Have something you’d like to share? Send us an email with a photo and description of the project. 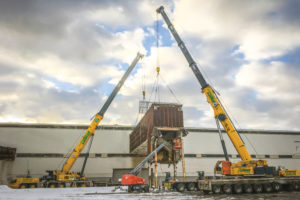 Two Grove all-terrain cranes – a Grove GMK6300L and a GMK6400 – recently helped demolish an abandoned General Motors facility by removing a 67.5-ton steel walkway. On one of side of the walkway, the 350-ton GMK6300L AT was setup, and the 450-ton GMK6400 was stationed on the opposite side. After rigging segments of the walkway to each crane, a demolition crew severed the walkway’s connections to the building’s walls and foundation. The free-hanging structure was then lowered to the ground, where the crew cut it roughly in half, resulting in two pieces that weighed approximately 35 tons each. Both cranes lowered their respective steel segments to street level for further disassembly and disposal. The walkway removal took about 15 hours to complete. 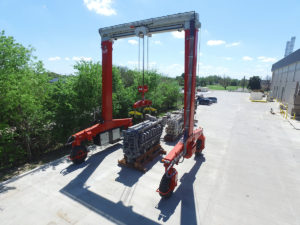 Shuttlelift has delivered a 50-ton-capacity SB50 single-beam rubber-tired gantry crane to Mustang Cat Power Systems in Houston, Texas. The Caterpillar dealer in southeast Texas specializes in handling large 3500-3600 CAT industrial engines. “We handle a very high volume of these engines on a day-to-day basis. Our new Shuttlelift allows us to stack them in rows much more efficiently,” said Scott Weaver, service operations manager. “Rather than spending an hour on a forklift to get the next engine in line, our SB50 allows us to essentially walk the machine down the rows and bring them directly to the front with a single pick, saving a tremendous amount of time.” 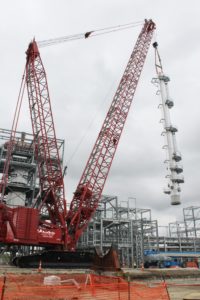 Croda Inc. made a $170 million capital investment to expand its Atlas Point facility, which will produce 100 percent renewable non-ionic surfactants, the active emulsifying agents used in face creams, toothpaste, paint, and laundry detergents. The Maxim Crane Works/AmQuip team recently completed the steel erection at the main processing center. An 800-ton Manitowoc 18000 crawler crane with 240 ft. of main boom was brought in to install the processing equipment in the newly completed processing center. The first pick made by the Manitowoc 18000 crawler crane was a scrubber drum that weighed 198,000 lbs. and was 100 ft. in length and 20 ft. in diameter. The 18000 successfully uprighted the scrubber drum with assistance from a 500-ton Liebherr LTM1400-7.1 AT crane to safely set into position.

A Manitowoc MLC300 lattice-boom crawler is helping contractors execute an innovative lift plan at a Honolulu $331 million rental car facility. Two tower cranes are being used on the inner two quadrants, with the MLC300 doing the work of multiple cranes to cover the remaining outer quadrants.  The 386-ton crawler crane is responsible for not only lifting formwork and other materials, but assembling and disassembling the tower cranes. HDCC is using the MLC300 configured with 118 feet of boom and 295 feet of luffing jib. The heaviest lifts on the job are the 10-ton tower crane components, but the crane is also lifting formwork, rebar, and buckets used for pouring concrete, all at a 295-foot radius. 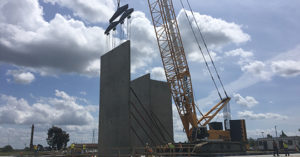 Bigge Crane and Rigging Co. recently performed a tilt-up in Fairfield. A tilt-up occurs when a building’s walls are poured directly into tilt-up panels at the jobsite. Once cured, the panels are raised into position around the building’s perimeter. Due to weight of the panels and site requirements, Bigge used a Liebherr LR1300 crawler crane to lift and set 29 pre-cast concrete walls for a new office building. The heaviest lift for the job was 174,000 lbs. Difficulties for the project included tight working spaces, and the Liebherr LR1300 having to be built, then walked onto a crane pad via crane mats to protect the concrete slab. Custom rigging was also required due to a one-off requirement/arrangement set by the embedded lifting eyes on the panels.