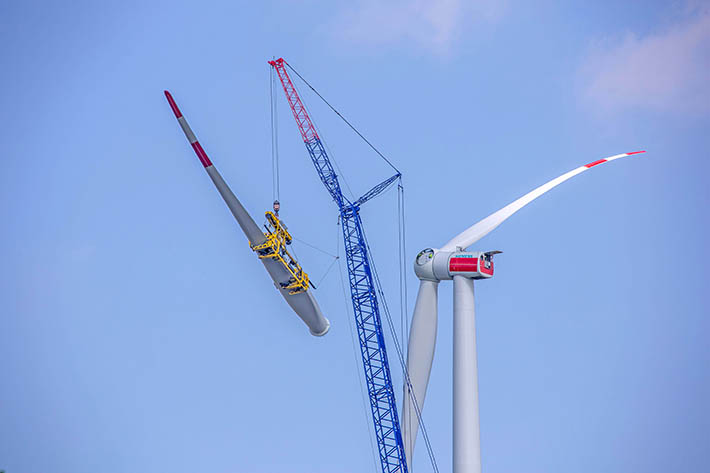 The blades on the latest generation of wind turbines are nowadays installed individually using rotor blade yokes. Liebherr has developed a system for this future-oriented application, which makes the installation process safer, more economical and in many cases also greener – the SLGS single-line guiding system.

The single-line guiding system from Liebherr stabilises the rotor blade yoke and blade in the wind.

To stabilise long rotor blades in the wind, helpers have had to be used on the ground with vehicles and, in some cases, even rope winches, to control the blades using long ropes. This requires a great deal of space on the ground as the force needed can only be generated if the ropes are spanned at an adequately low angle. For erecting wind turbines in forest areas, this means that more trees have to be felled than the component sizes of the crane and turbine components themselves would actually require. None of this is required if the new Liebherr SLGS is used as the blades are stabilised in the wind by the crane’s main boom. 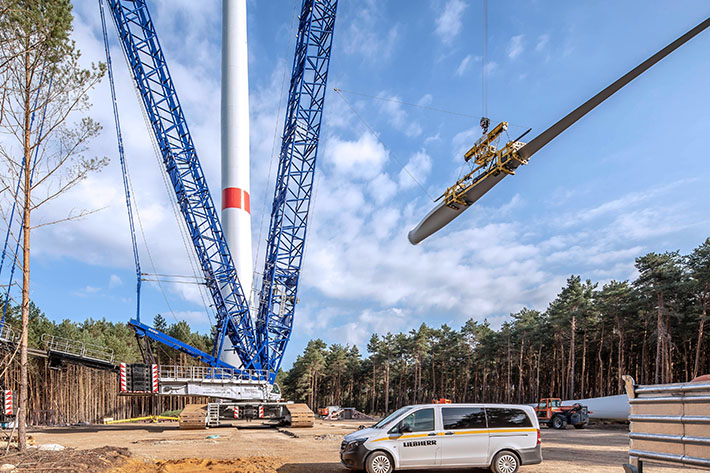 A perfect angle – the horizontal application of force on the blade by the main boom significantly improves the load control during the blade installation.

The single-line guiding system is a system which is attached to the main boom on the side facing the load. A rope is secured at the top of the boom head and tensioned using a rope winch below in the pivot section. A cable pulley with two connections to the outsides of the rotor blade yoke runs along the boom rope during the hoisting process. With its own power supply in the yoke, the two connections to the SGLS are tensioned so that the blade is stabilised in the wind and can also be moved into the correct angle for installation on the hub. Since the horizontal application of force on the blade by the main boom is perfectly aligned, the SLGS significantly improves the load control during the blade installation. 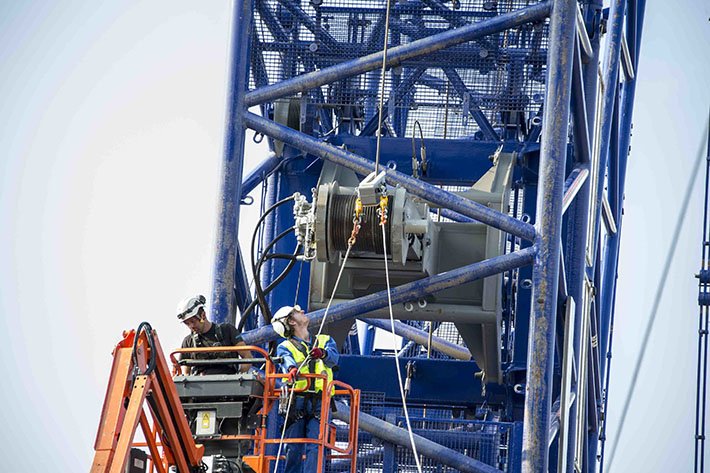 Installing the yoke on the single-line guiding system is easy.

The single-line guiding system from Liebherr can be used with rotor blade yokes from various manufacturers. Crane operators can retrofit the SLGS on all conventional wind power boom systems, including the new SX systems on LR 1750/2 and LG 1750 cranes at low cost, with the tensioning winch being installed instead of the luffing jib adjustment winch and the existing hydraulic system being used. Only the electrical system and software are added.

Lift Plan of the Year Competition