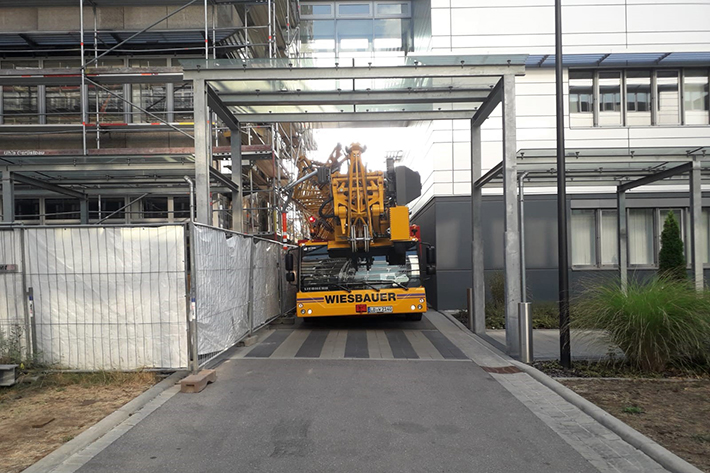 Three Liebherr mobile construction cranes have been in action as part of an administrative building retrofit in Neckarsulm. In addition to several steel elements, a MK 140 hoisted several air conditioning units onto the five-storey building. A MK 88 and a MK 100 were also involved in the construction project.

Liebherr MK 140 mobile construction crane in action as part of an administrative building retrofit in Neckarsulm.

Space was extremely limited throughout the project, consequently the mobile construction cranes were very much in demand: These cranes are able to get really close to the building in question, are easy to transfer from one location to another and have a height-adjustable elevating operator’s cab, ensuring the load is always in view.

Navigating access with a MK 140 was a challenge in itself. Otto Lindlar from the technical field service team at Wiesbauer GmbH und Co. KG measured this exactly in advance. “There was only around 15 cm of space to the left and right of the crane and there wasn’t much space to play with in terms of height either. The five-axle crane just managed to fit through,” he says. Once on site, the MK 140 came into its own as it needs very little space for its assembly.

With a maximum radius of 65 metres, the MK 140 has an impressive reach. The work required a 50-metre radius at times. However, in order to cover the entire construction site, the MK 140 had to be moved several times during its operation period. As it can be erected within a few minutes and at the touch of a button, this wasn’t a problem for the taxi crane. 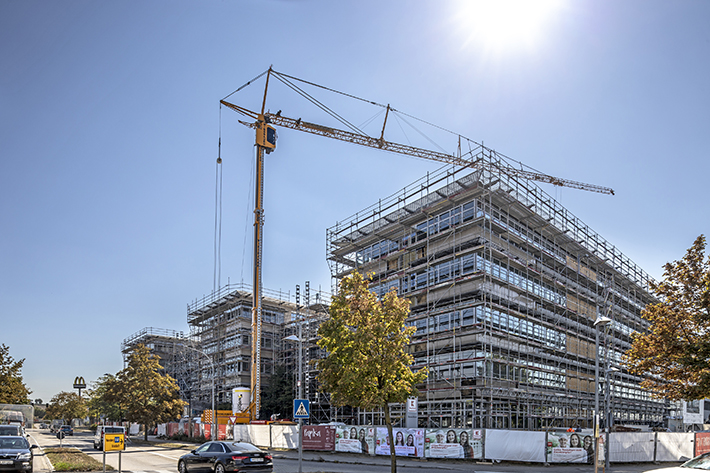 Access to the site was tight for the Liebherr MK 140 mobile construction crane.

Air conditioning units as well as roof and wall elements such as metal profile sheets were installed during the administrative building’s retrofit. For the latter, the MK 88 and MK 100 were sometimes sufficient – depending on where on the roof the material had to be lifted to. The three mobile construction cranes were deployed around 20 times during the three-month retrofit period.