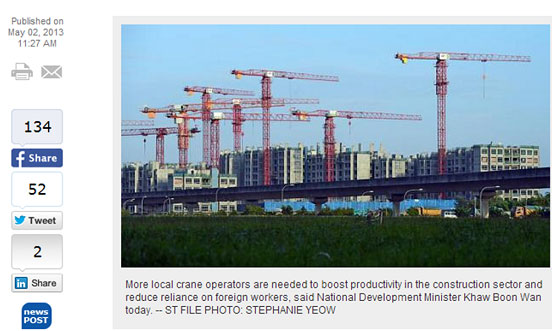 In May last year, Minister for National Development, Khaw Boon Wan, made a call for more Singaporeans to step forward to be crane operators. He said then that more Singaporeans were â€œneeded to boost productivity in the construction sector and reduce reliance on foreign workers.â€

â€œHalf of the (current 3,600) operators are Singaporeans,â€ he said. â€œBut we need more, a few hundreds more, as we ramp up our Build-To-Order programme.â€

While demand for operators continues to be high, the current ones are getting older, according to the Building and Construction Authority (BCA). Some 40 per cent of operators presently, it says, are 50-years old and above.

In April last year, the BCA introduced the Crane Apprenticeship Programme in the aim of recruiting more to the job. The one-year scheme sponsors the mandatory licensing course and offers on-the-job training. It is open to citizens and permanent residents.

When it was launched, it saw good response â€“ about 1,200 enquired about it then.

It is, however, unclear how many Singaporeans actually signed up and eventually became crane operators.

Recounting what a crane operator had told him at a Meet-the-People session, Mr Png said, â€œHe said many companies in the construction sector are still hiring more foreign crane operators not less. These foreign workers are cheaper and can work longer hours. As a result, salaries came down and many of his operator friends are unable to secure full time work. Some of his friends work only 2 times a week. He handed me a letter with the names of 46 tower crane operators pleading for help.â€

The MP said he met another crane operator on Thursday night who told him the same thing â€“ that companies are hiring more foreign crane operators, not less.

Mr Png said the reliance on foreign operators â€œwill never come downâ€ because the â€œBCA has launched a temporary initiative to relax the recruitment of foreign crane operators at the same time when it launched an initiative to attract more Singaporeans to join the trade.â€

As a result of this, Mr Png said â€œthe percentage of Singaporean crane operators in the construction sector will come down significantly over time.â€

The MP said, â€œSo the call to reduce reliance on foreign crane operators will not happen any time soon. I would like to ask the Minister when we can see an improvement in this sector.â€

He urged the government Â to look into helping local crane operators find their footing in the industry and if necessary set in place rules to protect them so that they can have job security.

â€œIt does not make sense for the Government to encourage more locals to become crane operators,â€ Mr Png said, â€œbut there are few jobs for them at the end of the day.â€