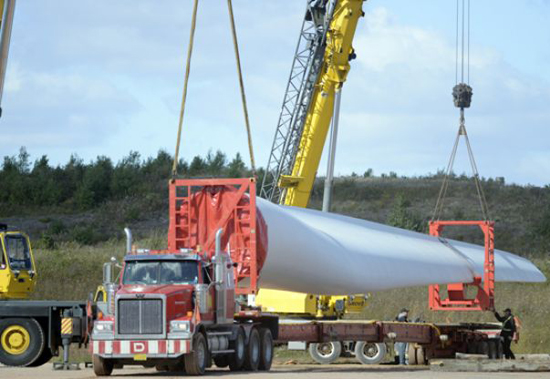 HERMANVILLE â€” A section of a giant wind turbine was damaged Wednesday here in eastern P.E.I. when one of the hooks the crane was using to lift it let go.

No one was injured in the incident.

“The crane was lifting a tower section and one of the hooks sort of let go and it hit the ground and bent a flange,” said Wayne MacQuarrie with the P.E.I. Energy Corporation.

Transporting the large piece of turbines has been quite the process. The 50-metre windmill blades each weigh almost 7,800 kilograms alone and negotiating the sections across the province and into eastern P.E.I. has been no easy task. Entire sections of roads have been shut down to enable the transport.

There are a number of pieces to the turbines. One is put on top of the other. Flanges help fasten the pieces together. 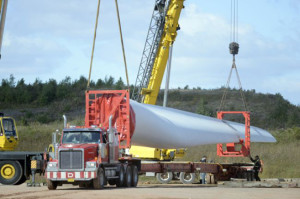 Work crews in Georgetown load one of the huge blades to be used on the wind turbines that are being erected in Hermanville in northeastern P.E.I. When up and runnng the turbines will be some of the tallest in the world.

“You put bolts between the flanges and tighten them up to secure the two sections together. One of those sections hit the ground and the flange bent and that was the extent of it.”

MacQuarrie said the damaged portion of the tower was replaced and work continues.

“It’s business as usual. We have 10 towers and there’s five sections to each tower so we’re installing about 50 of these tower sections.”

The huge blades for the giant wind turbines being erected in Hermanville were moved from a storage area in Georgetown in early October. When finally erected the turbines will be some of the tallest in the world. The turbines are being erected by a team directed by project manager Carl Brothers.

The turbines in Hermanville have the same power ratings as the ones at East Point but are 25 per cent larger. There are 116-metre rotors on a 92-metre tower.

“These things happen,” MacQuarrie said of Wednesday’s incident. “You’ve got a construction site this large with heavy equipment running around.”

The plan is that all the electricity produced from these turbines will be used on P.E.I. The project will cost $60 million and is expected to produce about 30 megawatts.