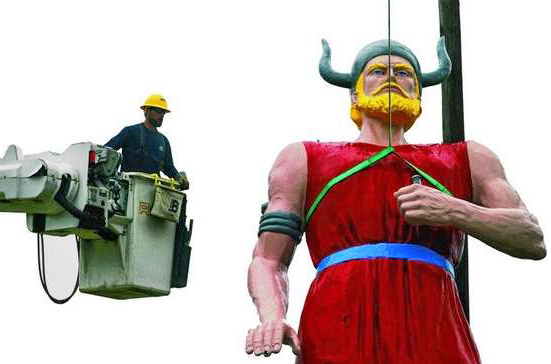 CHINCOTEAGUEÂ â€” An incongruous Chincoteague icon is back in place nearly a year after it toppled during Hurricane Sandy.

The Viking, as the 23-foot-tall fiberglass figure is simply known, had stood in a grassy field across from Pony Swim Lane for 30 years or more, becoming a landmark for thousands of visitors attending the islandâ€™s annual Pony Swim.

A crowd of two dozen residents and vacationers braved cold, rainy weather Wednesday to witness its raising after it was repaired.

Untold numbers of vacationers have taken photographs with the giant Norseman over the years as a memento of their visit to Chincoteague.

Among them are Linda and Tom Insley of Abingdon, Md., frequent visitors to Chincoteague who came out to see the Viking restored to its rightful place.

â€œWeâ€™re down here for the week, so we thought weâ€™d stop in,â€ she said.

Like all good legends, the Vikingâ€™s origins are shrouded in the mists of time, but some facts are known.

â€œCapt. Mr. Bobâ€ Payne, the former proprietor of Payneâ€™s Sea Treasures, learned of the statue from a friend, Jay Cherrix, according to Star Mondragon, who now operates Payneâ€™s shop. Payne passed away in 2006.

The Viking was lying outside an antique store in Marion, Md. â€” its owners reportedly got it from a campground, Gary Mason said.

It is that time of year again..Christmas & Cranes