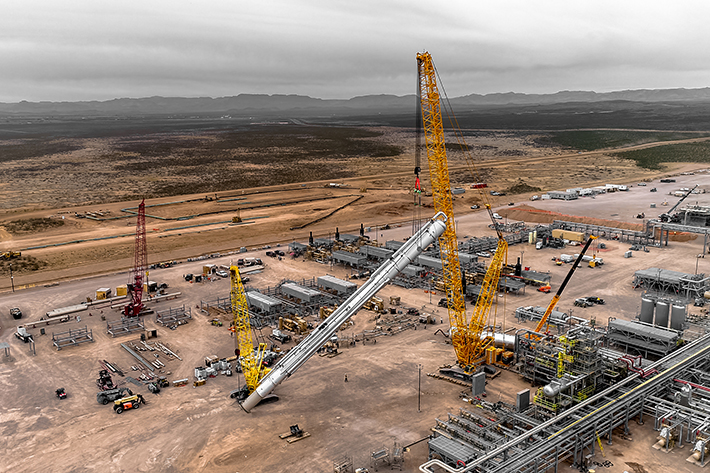 RMS Cranes selected a Liebherr LR 1500 crawler crane to lift three demethanizer towers for a major cryogenic gas processing plant in Reeves County, Texas. One tower has been completed with two left to set next month. Each tower weighs approximately 231 US tons, and are more than 197 feet tall and 11 feet in diameter.

Founded in 1977 in Denver, the company specializes in construction, wind energy, heavy industrial, oil and gas and power generation projects. RMS chose the LR 1500 crawler crane because it allowed the company to stand out amongst the competition with a smaller class crane that could still complete the job safely. In this case, the LR 1500 was equipped with a ballast tray, derrick and a 236 foot long S boom. 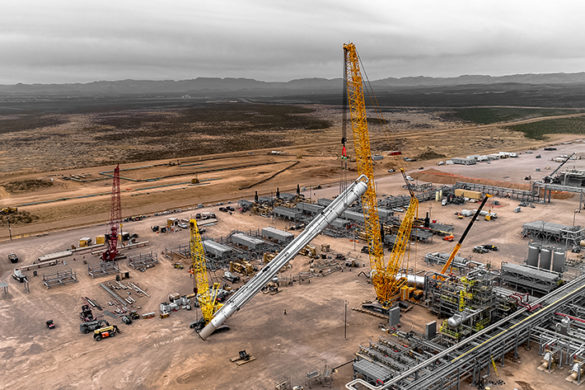 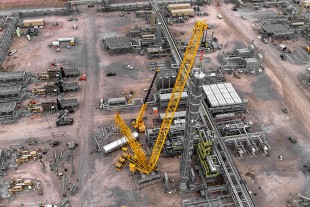 When an LR 1500 is on the job, efficiency is enhanced, logistics are improved and assembly and disassembly are quicker because a lesser rated assist crane can assemble the LR 1500. The crane has a lifting capacity of 550 US tons, a maximum hoist height of 538 feet, and a radius up to 472 feet.

Altus Midstream contracted Saulsbury Industries to build the Diamond Cryogenic Facility. Saulsbury began work on the site in early June 2018 and the project is expected to wrap up in the third quarter of 2019. Saulsbury selected RMS Cranes to perform the heavy lift crane support. All lifts greater than 30 US tons were performed by RMS using the LR 1500, which is owned by North Carolina-based Buckner Heavylift Cranes. The contract included specialized heavy lift rigging and hundreds of hours of engineering and planning.

“RMS Cranes chose to utilize Liebherr’s LR1500 crawler crane for this project because it allowed us to get competitive on our proposal as we were up against larger class machines,” said Nick Cantine, director of heavy lift projects for RMS. “The LR 1500 was the most effective and efficient option in regards to logistics, assembly/disassembly, and also has a versatile operating range.” RMS faced a fast-moving project timeline and worked on call for delivery of equipment and lifts of large components in tight job site areas. The LR 1500 is a reliable and safe large capacity crane that has a minimal footprint and minimal ground bearing pressures.

In addition to the demethanizer tower lifts, the crane is handling a variety of equipment on the job including six cryogenic skids and three surge tanks. Each of those items weigh 120 US tons. Some of these lifts required offloading and strategically staging the components prior to setting the equipment, thus requiring engineering and lift planning support to safely complete the job.

Liebherr adds value to the work that RMS does by providing reliable equipment with logistical advantages, the latest technology and great support for their engineering and lift planning team. The company’s fleet includes more than a dozen different models of Liebherr crawler, mobile, and rough terrain cranes. Cantine said the LR 1500 has replaced older cranes from another manufacturer because Liebherr has simplified operating procedures, maintains reliability, and continues to provide factory direct support.

“RMS Cranes is grateful for the service and support that Liebherr provides to us on a daily basis,” Cantine said. “Our team works along with Liebherr’s After-Sales Department consistently with a 100 percent response rate.” RMS has a 150 crane fleet and six branch operating locations.