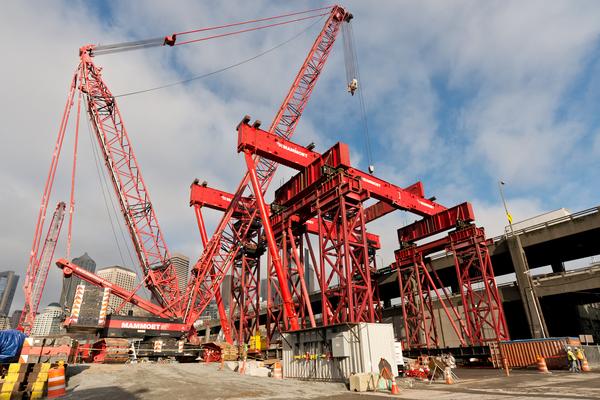 Digging resumed on the tunnel boring access pit Thursday after two weeks of work to make the pit’s walls watertight.

Crews are now 90 feet down on the pit, which will be 120 feet deep when complete. Contractors are digging the pit to reach the Bertha tunneling machine, which is stuck and needs to be pulled up to the surface for repairs.

The tunnel machine stopped digging a little more than a year ago after bearings failed. Since then, the tunnel project â€“ which when completed will replace the Alaskan Way Viaduct â€“ has been stalled. The most recent projections suggest the project will be finished in 2017, assuming things stay on schedule from here on.

Mammoet will lift Bertha’s cutting head to the surface.

Crews will alternate between digging and sealing the walls of the pit until it is complete, according to the Washington State Department of Transportation.

Above the pit, workers have nearly finished a large rectangular crane, which they will use to lift the cutting head. Seattle Tunnel Partners, which is the contractor overseeing the project, will start testing the crane later this month to make sure it’s strong enough to hold the 2,000-ton tunnel machine.

The machine, commonly called Bertha, has been stuck for more than a year since seals failed and damaged the main bearing.

Crews are set to lift the 57-foot-diameter cutting head from the pit and once the 2,000-ton cutting head is brought to the surface, Seattle Tunnel Partners will replace the bearing and the seals.

Progress on the pit had been delayed after the ground near the project started sinking, which had experts concerned there might be damage to nearby buildings and the Alaskan Way Viaduct. Tests show that ground settlement near the pit has ceased, though, and that the ground remains stable. WSDOT tested 57 buildings near the project and found no structural damage from the earlier settling.