Remember when cranes were FUN?? Ok they still are. 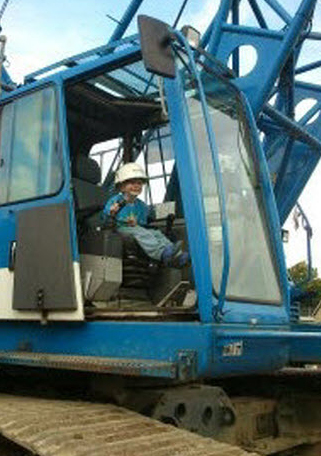 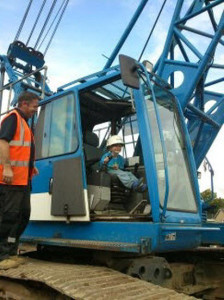 Five-year-old Russel Taylor enjoys the chance to sit in one of the cranes being used to revamp the Abbey Bridge.

TWO lucky Evesham boys were given a weekend to remember when they were given the chance to sit in one of the cranes being used to revamp the town’s Abbey Bridge. Five-year-old Russel Taylor and his brother Lewis, 18 months, enjoyed spending time sitting in the crane and seeing the workmen busily going about their jobs on Saturday (October 5) morning. And while Russel loved the experience, Lewis was less happy about the crane and the obvious noise but mum Susy thanked contractors Hochtief for the experience. “I want to say a very big thank you to the workmen on the Abbey Bridge who let my two boys sit on the crane on Saturday morning,” she told the Observer. “Russel told me it was a lot of fun and thanked the nice workmen for showing the crane to him and giving him his own hard hat to wear. “It was a special experience for them and I am so delighted they will be able to look back when the bridge is finished and say they were there when it was being constructed. “What a great team we have working on our town’s bridge and thank you again for the kindness shown to my boys,” Susy added. And as these pictures sent to the Observer show, work on the bridge is continuing on schedule after the 10 week closure began on September 19. Jon Elliott, Project Manager for Hochtief said: “Both Hochtief and our sub-contractor, Gilpin Demolition, are aware of the keen community interest in the Abbey Bridge and Viaduct replacement project. “We were pleased to fuel the minds of the next generation of engineers by showing them around the machinery being used on the project.”

Remember when cranes were FUN?? Ok they still are. was last modified: October 15th, 2013 by Ron Selby

Now that is a tight fit…

Rubber Ducks Rule…..”soft, friendly and suitable for all ages!”