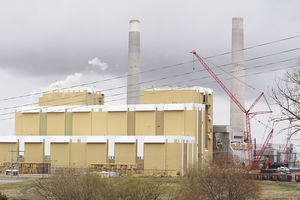 The second largest crawler crane in the United States, a Manitowoc 21000, is stationed next to Gerald Gentleman Station on April 20. The crane is being used to help with maintenance during a scheduled outage at the power plant.

The Manitowoc 21000 crane outside of Gerald Gentleman Station is hard to miss. Itâ€™s one of the largest cranes in the world â€” with all the booms attached, the crane can span 640 feet.

The Nebraska Public Power District is currently utilizing the craneâ€™s strength to make repairs during its spring maintenance outage.

The crane arrived at the plant in nearly 100 truckloads and was assembled on site using a crane about half its size. This is the second time the crane has been at the plant; it was previously used for repairs to the baghouses in 1999-2000.

This time, it will be used to remove existing duct work and replace it. Phelps said that without the crane, the job could take several months and would put workers at a higher risk. The unit would have to be shut down and workers would be forced to disassemble and reassemble the duct work in place.

With the crane, the ducts can be removed and replaced with new pieces that are assembled on the ground.

Phelps said the crane can lift more than 1,000 tons; the largest piece that it will pick up at the power plant weighs about 100 tons, and the crane will be moving it 300 feet.

Right now, about 500 employees are working the day shift at GGS because of the extra contractors brought on for the 50-day outage. Generally, Phelps said, there are about 200 employees during the day.

Phelps said they were able to start the outage earlier than planned because of low market prices. Outages usually last about 35 days, Phelps said.

â€œWeâ€™re supposed to start back up around June 1,â€ Phelps said.

â€œWe bring over 30 million dollars a year to the local economy,â€ Phelps said.

At full capacity, the plant can burn as much as 800 tons of low-sulfur coal per hour. GGS produces 1,365 megawatts of power and has been recognized as the lowest cost coal-fired producer in the United States.

This story originally appeared on www.nptelegraph.com