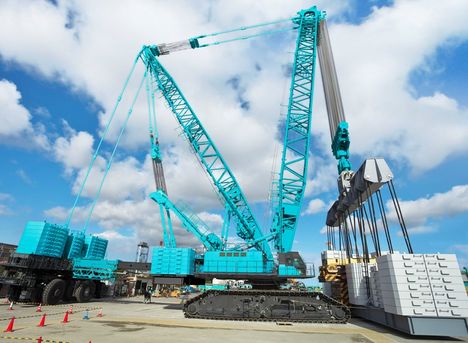 During Bauma, Kobelco has been testing its biggest crane to date, the all new 1,250 tonne SL16000J-H, prior to shipping the first unit to lead customer, Japanese crane rental company MIC.

The new crane can lift its maximum capacity at a radius of 10 metres, and has a maximum systems combination of 95 metre main boom and 85 metre luffing jib. It is offered with either a standard configuration or Super heavy lift specification. It can be relatively easily transported within the strict Japanese transportation regulations. 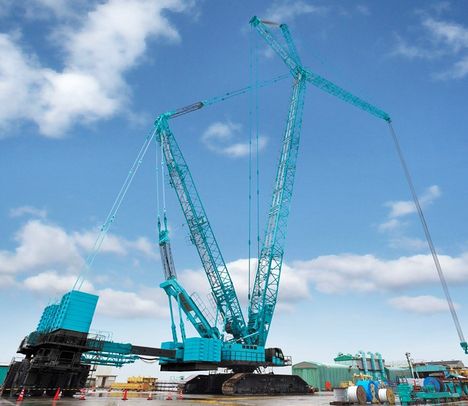 The two companies held an official hand-over ceremony during the exhibition last week although details on how many units were involved was not forthcoming. We understand however that so far Kobelco has sold at least five of the SL16000J-H, with three of them going to MIC for work on nuclear power plants and possibly the new Olympic facilities for Tokyo 2020.

Kazuhide Naraki chief executive of Kobelco Construction confirmed the deal with Eikichi Oyama president of MIC. Naraki thanked Oyama for the companyâ€™s long-term custom, support and cooperation, over the years MIC has purchased around 400 Kobelco cranes, which make up a large part of its 400 strong rental fleet. MIC whose cranes are easy to recognise for their bright multi coloured hues, was founded in 1960 , and one of Japanâ€™s leading crane companies. 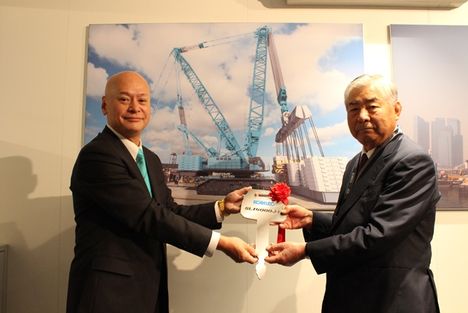 This story originally appeared on vertikal.netÂ