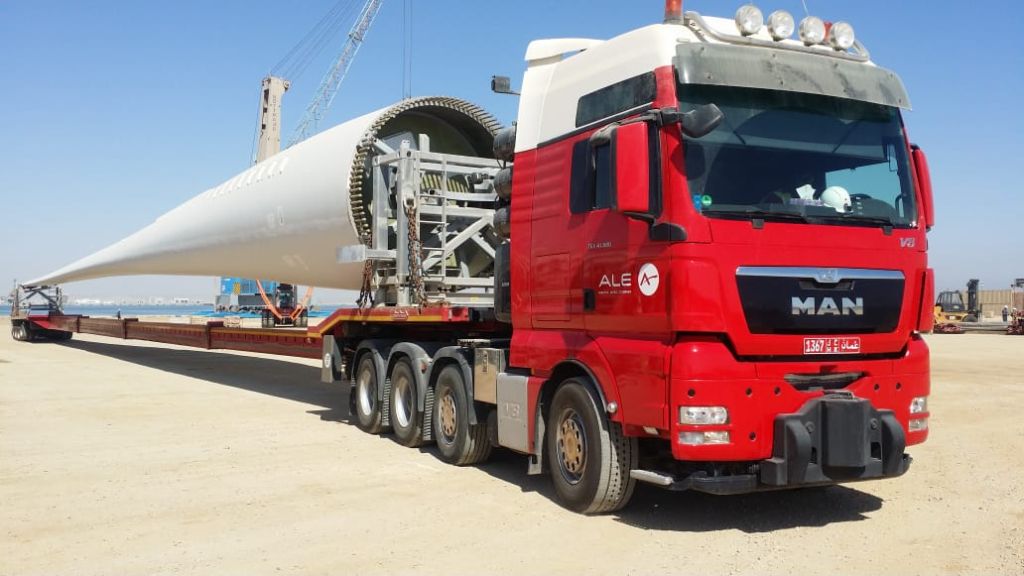 ALE is demonstrating its wind expertise and capabilities as they start the receiving operations of GE wind turbines components in Oman for the Gulf Cooperation Council’s (GCC) first-ever large-scale wind farm.

The global heavylifting contractor, has been contracted for the Dhofar Wind Power Project, to receive, transport and install 13 wind turbine generators, which consist of almost 100 large components.

The 50-megawatt (MW) Dhofar Wind Power Project is being jointly developed by Abu Dhabi Fund for Development (ADFD) and Masdar (Abu Dhabi Future Energy Company), with the construction awarded to GE and Spain’s TSK. Upon completion, the wind power plant will be delivered to TANWEER and the high voltage transmission overhead line will be handed over to OETC for operation and maintenance. 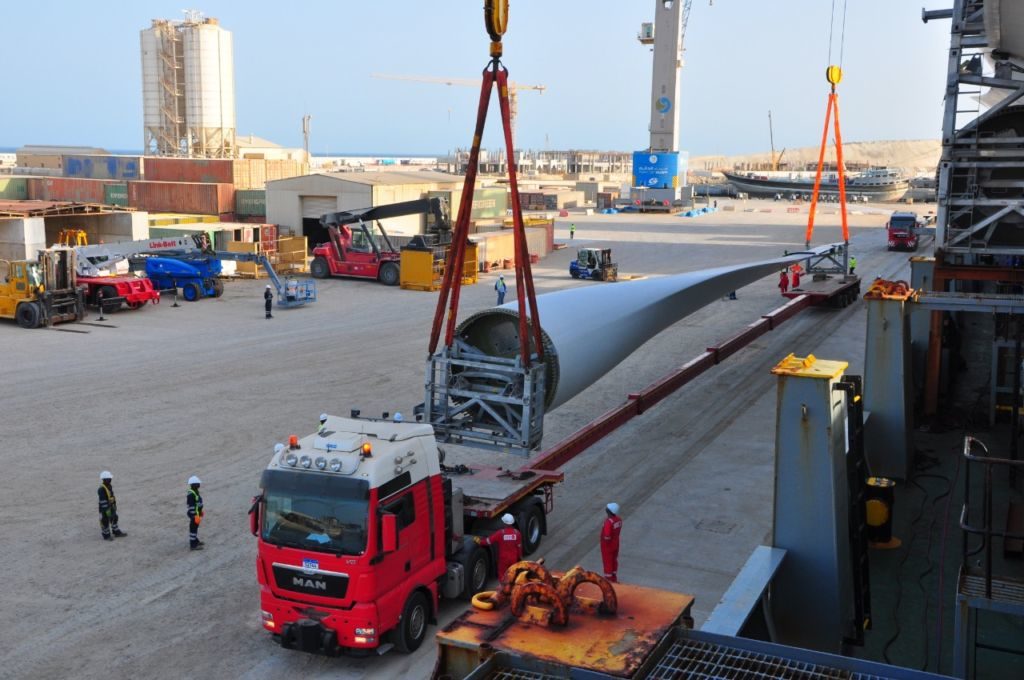 Receiving wind blades at the Port of Duqm

ALE started to receive the components, comprising blades, tower sections, nacelles and hubs at Port of Duqm in September. Upon completion of custom clearance, all components were taken to ALE’s laydown area, close to the port, which was beneficial for the project.

The components will be transported 590km overland to the Dhofar Wind Power Project site, two components of the wind turbine generator with each convoy. Due to the sheer size and scale of the convoy, with components measuring up to 65m long and weighing up to 100t each, the items will be escorted by the police. 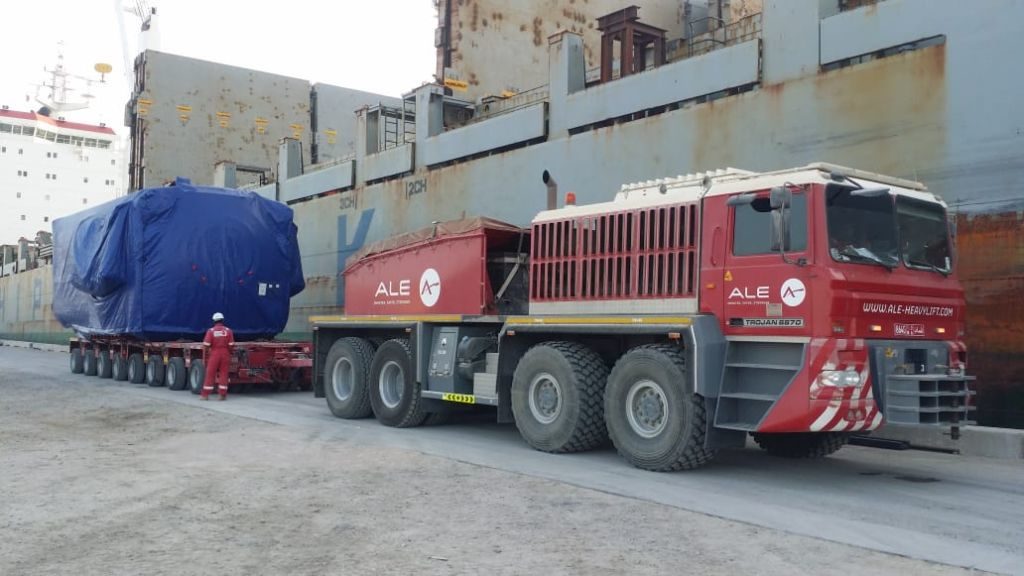 “By utilising our wind-specific equipment and personnel with the vital wind expertise, we can provide a timely solution with one, simplified interface.”

The transport will be ongoing, starting October 2018, and the lifting operations are expected to commence in December 2018 with the support of the ALE – Wind Services division for the electro-mechanical installation phase.

For the lifting scope, ALE has proposed a time-efficient solution by moving the main crane partially assembled across pads with hydraulic trailers.

ALE’s scope for Dhofar Wind Power Project is expected to be completed by February 2019, at which point there will be 13 fully installed wind turbine generators. 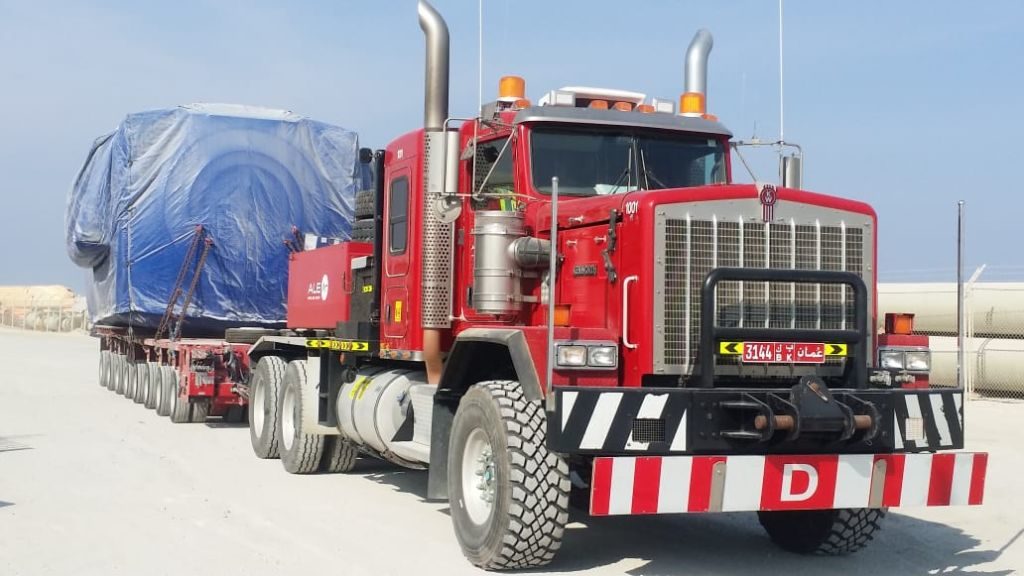 Dr. Manar Al Moneef, General Manager, GE Renewable Energy, in Middle East, North Africa, and Turkey said: “We are proud to partner with Masdar and TSK for the first largescale wind farm in Oman. The wind farm features our 3.8-130 wind turbine customized to the desert conditions specific to the gulf region. The country has an immense untapped potential in renewable energy, particularly in wind. With this project we are demonstrating our strong commitment to support the aim of diversifying the energy mix in Oman and in the region. I’m excited to see the installation of the first turbine at the site.”

The project is located in the Fatkhait area of the Wilayat of Shalem and Halaniyat Islands in Oman’s southern Dhofar Governorate bordering Yemen, the largest of the Sultanate’s 11 governorates. Upon completion, the project will provide electricity to approximately 16,000 homes while displacing 110,000 tonnes of carbon dioxide emissions per year.

Hoisted into the winter break