Hoisted into the winter break 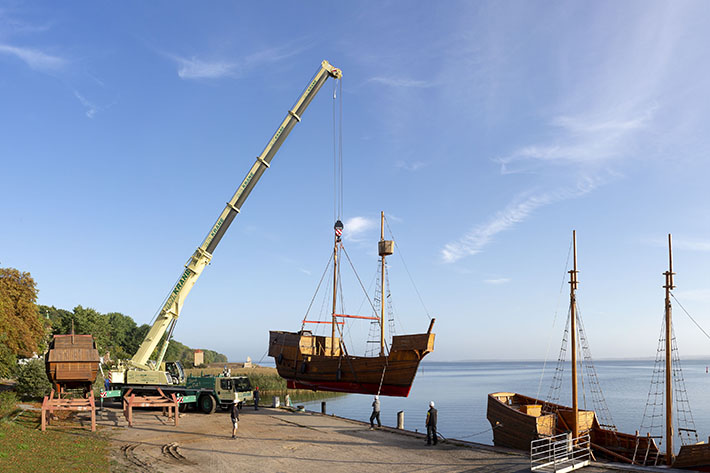 One hundred thousand visitors stream to the small town of Ralswiek on the island of Rügen every summer. Every year, fascinating stories about the famous pirate Klaus Störtebeker are played out in great detail on a natural stage on the banks of the Jasmunder Bodden, a lagoon measuring almost 100 square kilometres near the island in the Baltic Sea. After the play season, the cogs used by the theatre are hoisted onto land and protected for winter. A Liebherr LTM 1100-5.2 mobile crane recently had these replica Hansa vessels on its hook.

A crane hook rather than a grappling hook – the LTM 1100-5.2 moves the second boat safely onto dry land.

When the curtain falls on the last Störtebeker Festival in late summer, a mobile crane from Stralsund makes its way every year to Ralswiek in the north of the island. For around 25 years, the mobile cranes from H.N.Krane have been booked twice per year to hoist the cog boats used at the open air theatre. However, although the ivory-coloured cranes return year after year, not only do they go to hoist the theatre boats, weighing up to 22 tonnes, before and after the season, but also to erect a large number of sets for the natural stage. 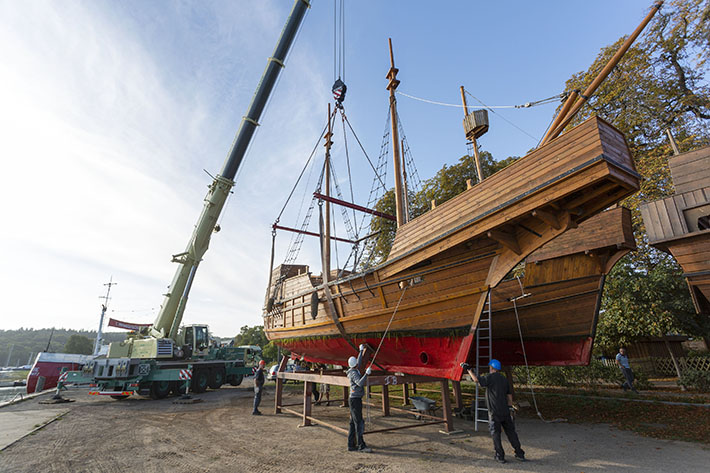 Fingertip control – one of the cogs is placed on a metal construction where the boats spend the winter.

The crane depot in Stralsund is one of six outlets which H.N.Krane operates between Hamburg and the border with Poland. Crane and haulage work are the main areas of focus of the company based near Rostock, which has a workforce of around 120. The fleet, which has recently been expanded with a Liebherr LTM 1090-4.2, consists of around 40 mobile cranes. With a single exception, all of them bear the Liebherr brand.

Next spring, once again a Liebherr crane will return the pretty cogs into the water just before the Störtebeker season gets underway again on the island of Rügen. Perhaps, Hendrik Pritz will be at the wheel again, as it was he who completed the job this autumn with his LTM 1100-5.2. The experienced crane operator is also delighted with his five-axle crane: “VarioBase is fantastic. You can do all sorts with it. After all, not everywhere has a set-up area like here.” 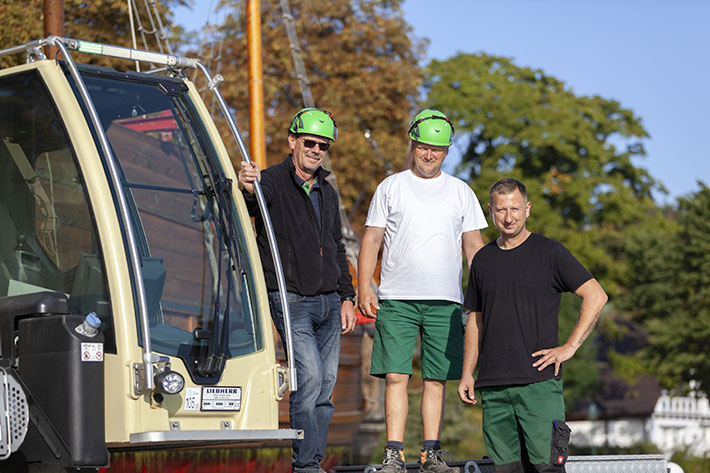 Satisfied – Frank Kuhlmann, External Technical Service Manager at H.N.Krane, with his team, truck driver Stefan Buchholz and Hendrik Pritz, operator of the LTM 1100-5.2, after the work has been completed (from left).