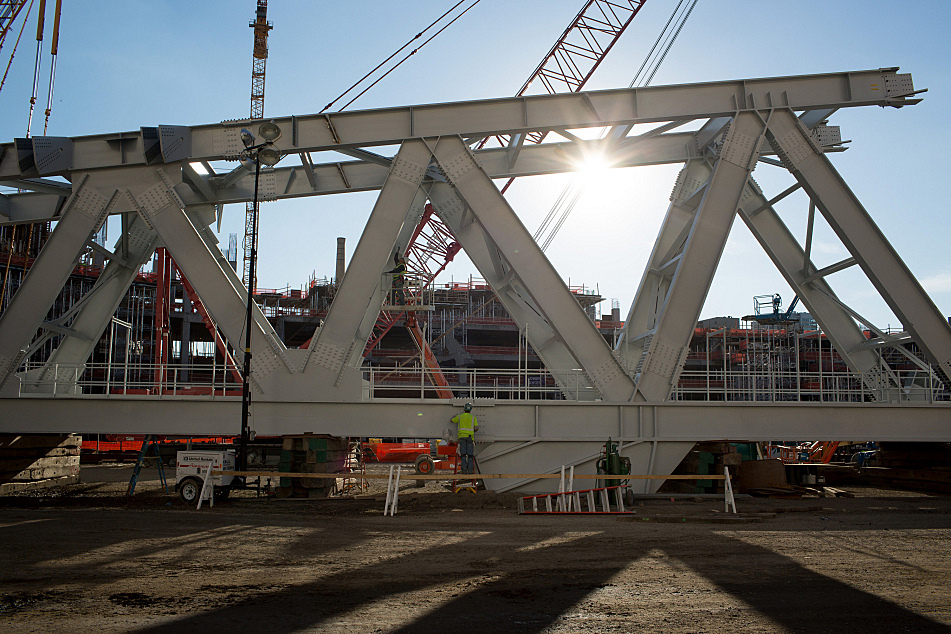 oncrete pillars, steel trusses and construction cranes continue to reshape the skyline of the new Vikings stadium in downtown Minneapolis. Project managers say the building is nearly a quarter of the way complete and remains on track to open for the 2016 football season.

Not that it looks like anything special just yet. 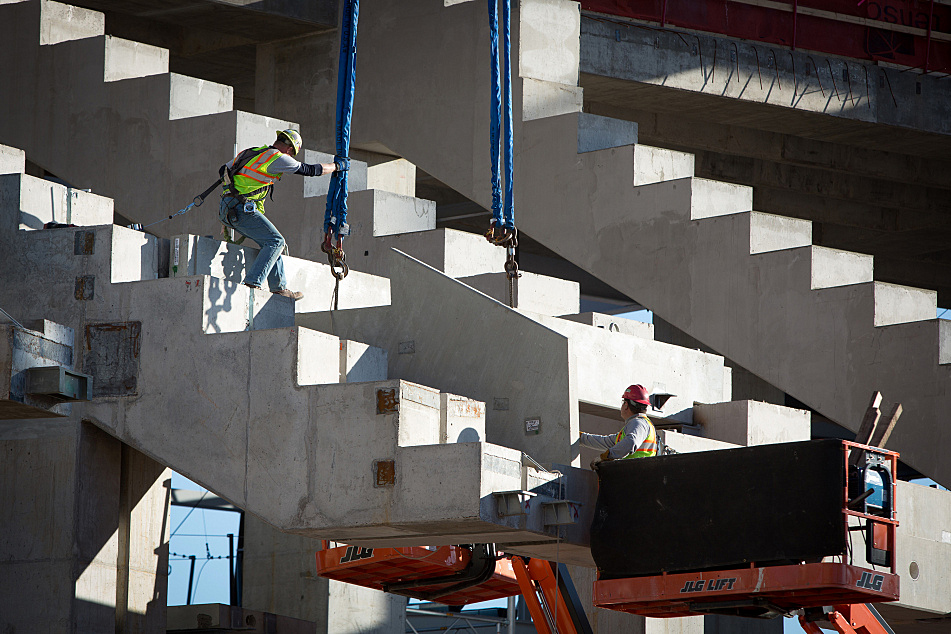 More than 650 workers are on site each day while the new Vikings stadium is under construction. Jennifer Simonson / MPR News

If you’ve ever walked through a house while it’s under construction, it’s usually easy to picture where doors, windows, and plumbing fixtures will go, even if the walls are just a skeleton of 2x4s. But stand on what’ll soon be the 50 yard line at a billion dollar football stadium, and you need someone to explain just exactly what you’re looking at.

“You can see just through the green tower there, that’s the highest level,” said John Wood, a senior vice president at Mortenson Construction, the project’s general contractor. Wood points to a mass of brand new concrete six levels above the east end zone. “The seating, which’ll be above that. That’s the highest concourse.”

Wood says about a million dollars worth of labor and materials go into the project every day. And the progress is obvious. Only 10 months ago the Vikings played their last game at the Metrodome before it was torn down.

Since then, he says workers have poured about 55,000 cubic yards of concrete, about half of what’s needed for the project. That’s enough to fill 5,500 standard cement trucks. 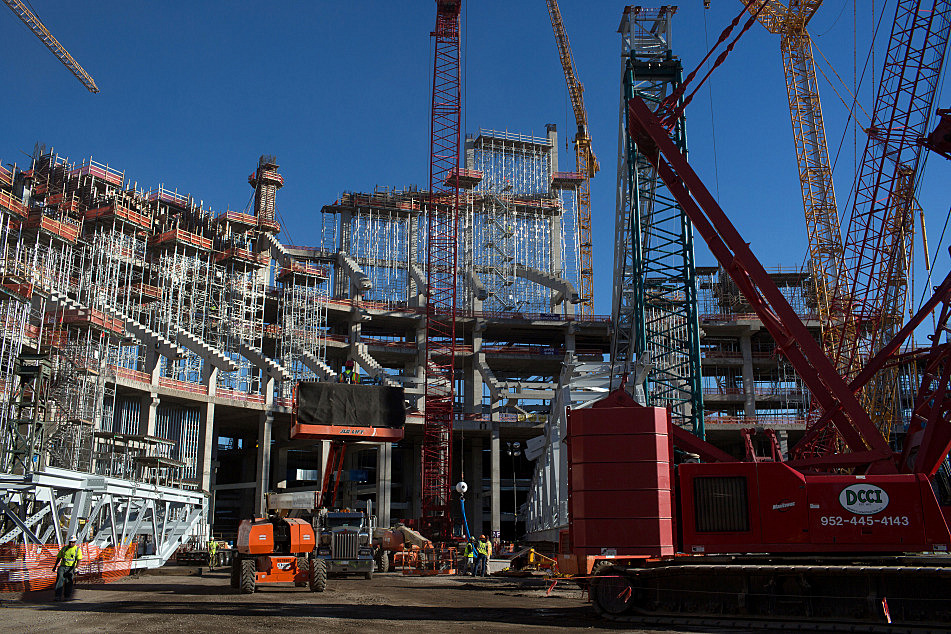 If something’s not made of concrete here, chances are it’s steel. Like the Metrodome, the new stadium will have a roof, but not one held up with pressurized air.

In the dirt â€” on what will be the playing field â€” sits a zigzagging network of steel I-beams held together with bolts. It looks like something you’d see under a bridge, but project superintendent Dave Mansell said it’s a section of the main roof truss, weighing 740,000 pounds, and it won’t be on the ground for long.

“We’ll be setting that mid-November, and that’s really what we need that large crane for,” he said. 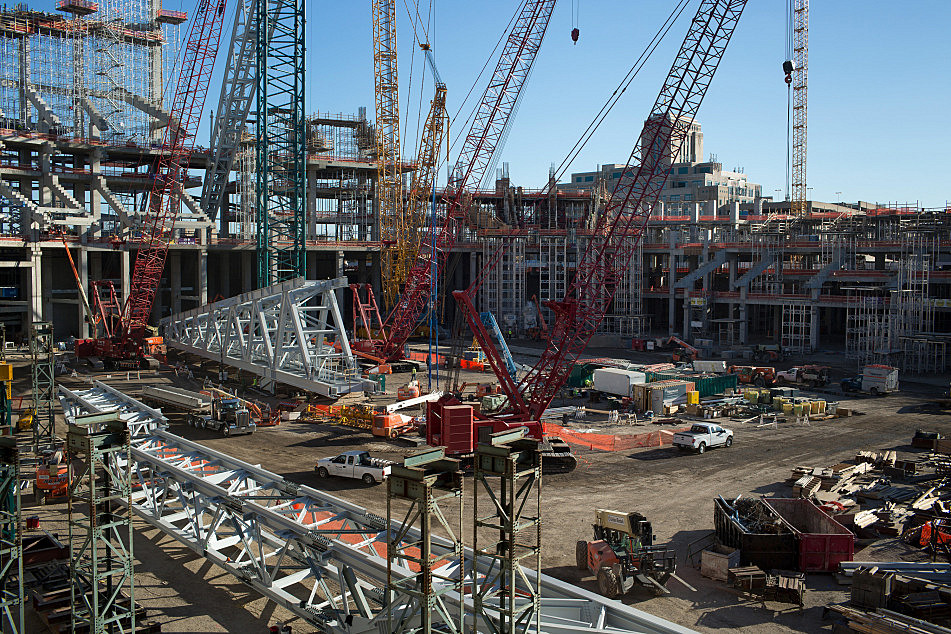 That large crane is one of 13 on site now. Mansell, who also oversaw the construction of Target Field and the Xcel Energy Center, said two more cranes will be on site by March.

With all this equipment, temporary structural supports, and scaffolding, the place looks chaotic, but Mansell said it’s highly controlled chaos. Every day he looks at a 3D computer rendering of the project that’s linked to the construction schedule. With design software he calls his crystal ball, Mansell can see what the stadium should look like, if everything stays on schedule, a week, a month, or six months from now.

This detailed planning means workers can do things on this project they never could do while building a house. Even though the stadium doesn’t get its main roof until March, Mansell said drywall crews have already hung sheetrock in parts of the club level that are enclosed. 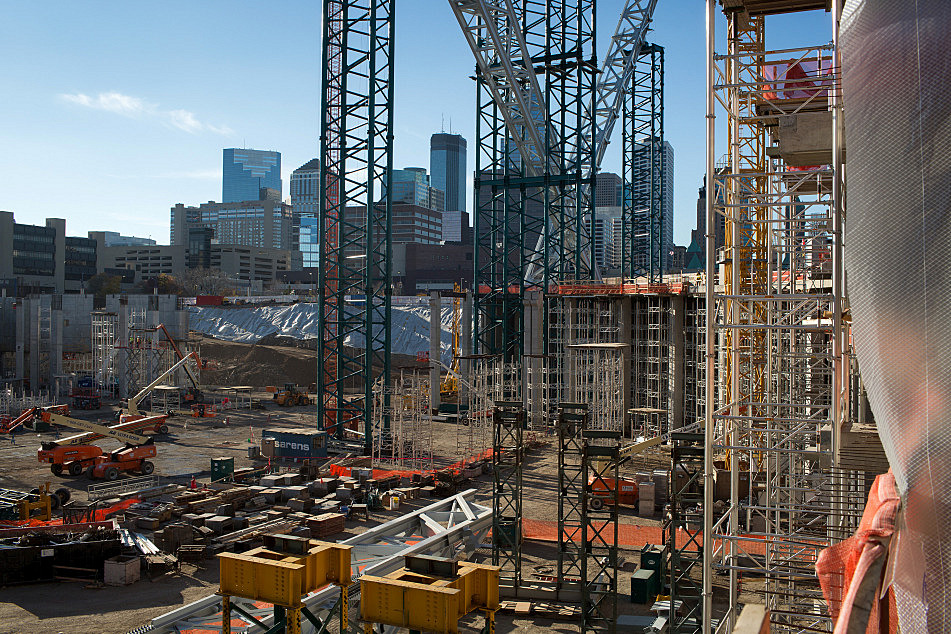 “On a building of this size, you can’t wait until you get the roof completely on to start this work or you’ll never get finished. As soon as we open up space, we have all the coordination done and we can start doing the rough-ins,” he said.

And in case you think Minnesota’s winter will mean a slowdown in work, Mansell said think again. Concrete and iron work will continue despite the cold, just as long as it’s not too windy.

The number of workers on the site will increase to around 800 in January, and more than 1,100 by the spring as the new Vikings stadium continues to take shape.