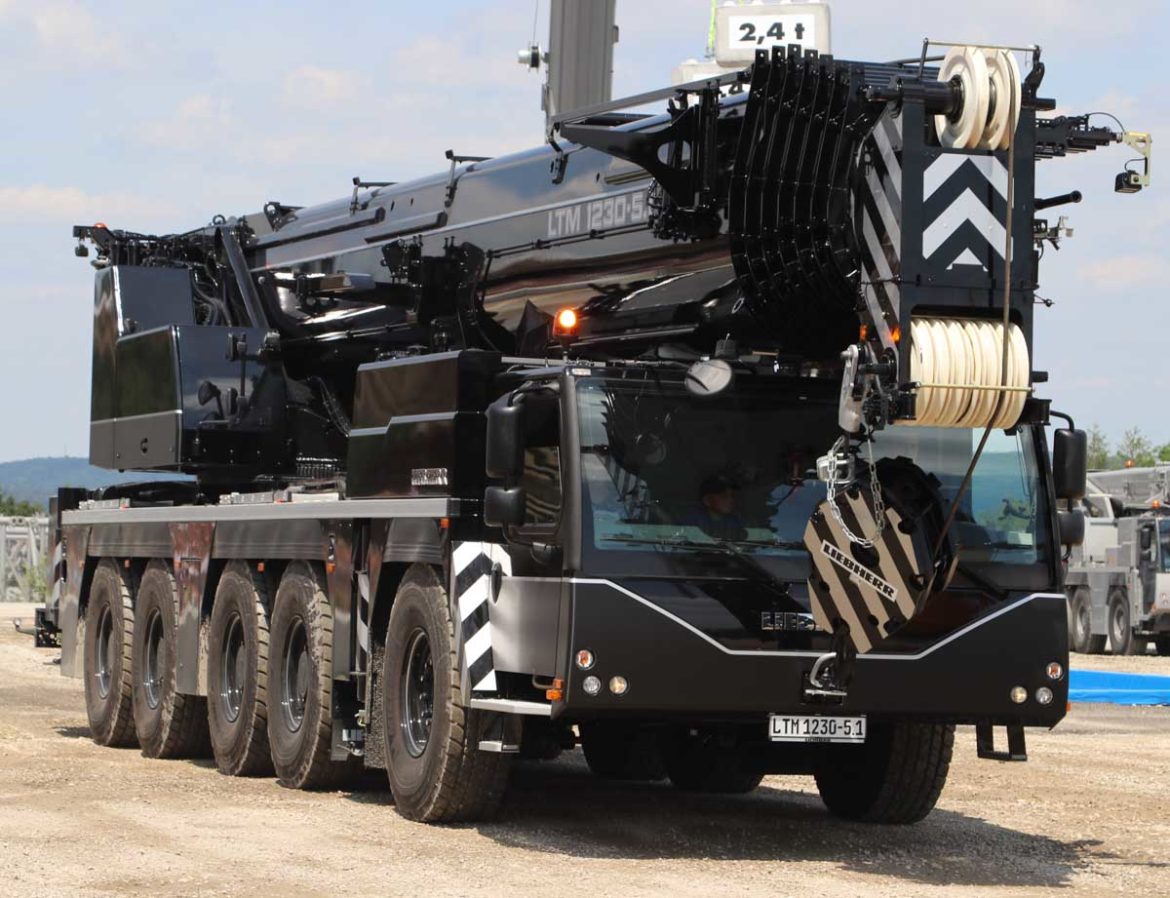 “Long, powerful and versatile” is Liebherr’s description of its new LTM 1230-5.1 mobile crane at its customer days 2018 at the manufacturing plant in Ehingen. The highlights include the length and lifting capacity of the telescopic boom. Its predecessor, the LTM 1200-5.1, also had one of the longest telescopic booms in this crane class at 72 metres. The new 230-tonne crane not only delivers an extra 3 metres in length but also an average of 20 percent greater lifting capacity. In addition to a multi-functional folding jib, a 43 m fixed jib is also available. The Liebherr innovations VarioBase®, VarioBallast, ECOmode and ECOdrive mean that crane operators can use the new LTM 1230-5.1 with even more safety and efficiency. 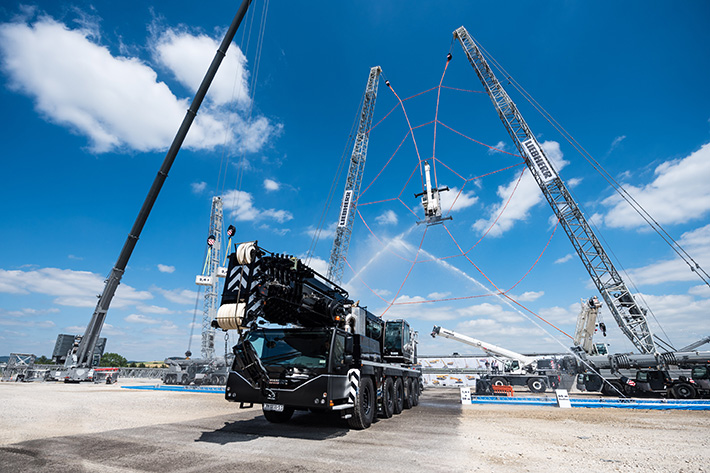 Liebherr unveils the five-axle LTM 1230-5.1 at its customer days in Ehingen (Germany).

The LTM 1230-5.1 is the successor to the global success that was the LTM 1200-5.1. In its development work, Liebherr pursued the objective of increasing both the boom length and the lifting capacity of its predecessor. The result: the LTM 1230-5.1 delivers an extremely long telescopic boom and sets new standards in terms of lifting capacity. With lattice extensions, the maximum hook height has been increased by 10 metres to 111 metres. The new Liebherr LTM 1230-5.1 is an ideal crane for working on steep gradients and large hook heights, for example for erecting tower cranes or maintenance work for wind turbines.

Liebherr has a wide and variable range of lattice jibs for the new LTM 1230-5.1. The 11.5 to 22 m long folding jib can be mounted at an angle of 0°, 20° or 40°. The folding jib can be supplied with a hydraulic adjustment system as an option which allows it to luff with a full load between 0° and 40°. The pivot point for the folding jib can be raised using up to three straight 7 m lattice sections acting as telescopic boom extensions.

For the last three years, customers with the LTM 1250-5.1 have been able to install a long fixed jib, the first of its kind in the 5-axle class, to achieve enormous radii, for example for hoisting over buildings. This lattice jib is also available for the new LTM 1230-5.1: a fixed jib up to 43 m in length can be achieved with an additional TF adapter (connection between the telescopic boom and the fixed jib), a reducer section and a head piece. Existing lattice extensions are used for this purpose. This jib is generally hydraulically adjustable between 0° and 45° and can therefore be used like a luffing jib. The existing parts can be used to assemble a particularly powerful jib up to 39 metres in length which is ideal for steep working positions.

The engineers at Liebherr-Werk Ehingen GmbH placed the multi-award-winning VarioBase® support technology at the focus of the structural steel construction when creating the concept for the new crane. This meant that the new LTM crane is the first to have an asymmetrical support base – with the width being 7.4 metres at the front and 8.1 metres at the rear. VarioBase® means that it is now possible to generate particularly high lifting capacities, particularly at the rear working area over the 8.1 metre wide supports – calculated in real-time by the LICCON controller. This new digitalisation facility has a major influence on the structural steel technology and enhances the customer benefit in the form of lifting capacity increases.

A six-cylinder Liebherr diesel engine in the undercarriage which develops 400 kW / 544 bhp and torque of 2,516 Nm provides the LTM 1230-5.1 with all the power it needs. The engine already complies with the Stage V exhaust emissions standard.

The power is transferred to the crane axles via the 12-speed ZF TraXon gearbox. This innovative gearbox delivers new functionalities and benefits for the operator and driver. ECOmode makes the vehicle significantly more comfortable and quieter due to the low engine speed. Furthermore, faster gearshifts ensure greater scope for off-road use. The crane driver also has the “Hill Holder” feature to assist with hill starts.

The LTM 1230-5.1 also features the Liebherr single-engine concept which involves a mechanical shaft powering the superstructure. Gear shafts are routed from the distributor gear in the substructure via two mitre gears through the centre of the slewing ring to the pump distributor gear in the superstructure. An add-on programme in the drive concept ensures that the machine is particularly fuel-efficient. This means that the complete pump drive can be disconnected automatically when the engine is idling and then reconnected by the intelligent controller in a matter of seconds when it is required.

Liebherr has also developed a special mode for mobile cranes in the load-sensing range to reduce the cost of crane operations whilst also reducing noise emissions. ECOmode minimises both fuel consumption and noise emissions when operating the crane superstructure.