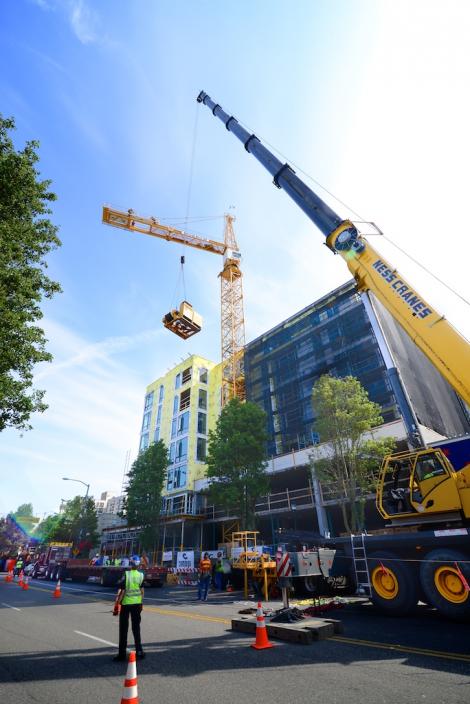 Compass Construction, in charge of building the 88 unit multi family/retail development at 4730 California Ave. S.W. took their construction crane down on Aug. 16. During the 8 hour process, each component of the crane was separated, detached and lowered to the ground where it was then placed on large extended flat bed truck to be taken away.

During this time the sidewalk in front of the jobsite was closed and the parking restricted on both sides of the street. Uniformed police officers were on site to direct traffic and pedestrians. When the crane was erected last September a large crowd watched on the west side of California Ave SW.

The complete plan for the building includes an extensive amenity package, an exercise room, a common room, rooftop deck with BBQâ€™s and tables, storage units, bicycle storage, and a modern urban entry lobby. The building is expected to open by the end of 2014 and will have three retail spaces.

The 200 ton, 175 foot tall mobile crane from Ness Cranes was brought in for the removal. A crew of 8 was in charge of the job.
By Patrick Robinson
08/16/2014
A 175 foot, 200 ton mobile crane was brought in from Ness Cranes by Compass Construction take down the construction crane that was used for the initial stages of building the 88 unit multi-family/retail project at 4730 California Ave. S.W. on Aug. 16. The winch is being lowered in this photo.