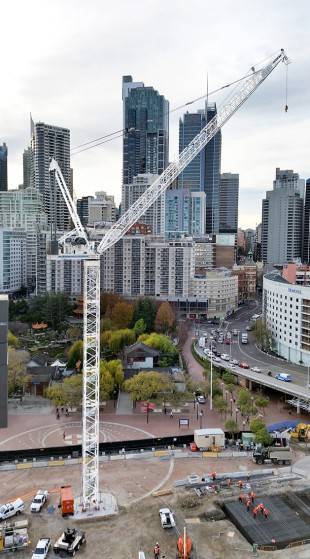 Liebherr’s exclusive distributor in Australia, Morrow Equipment Co. L.L.C. based in Caringbah, NSW near Sydney, has expanded its crane fleet. Morrow continues to expand its hire fleet with the purchase of two new 542 HC-L 18/36 Litronic cranes and a used 540 HC-L model. The high level of usage of the existing hire fleet, positive signals from the market and several pending large projects in the cities of Sydney and Brisbane were the reasons behind the purchases.

Morrow has rented the two brand new 542 HC-L luffing jib cranes to the Lend Lease Corporation, one of the largest construction contractors in Australia. The contractor plans to use the two cranes in the near future for the major construction site for the new Convention Center in Darling Harbour, Sydney. This prestigious project at Sydney’s new landmark will enable the two cranes to show exactly what they can do.

A 420 EC-H 16 Litronic crane is on its way to Christchurch by sea. The New Zealand government is currently rebuilding the city, which was very badly damaged in the serious earthquake that struck in 2011. The rebuilding work and construction projects will take several more years to complete, however.

One of the largest projects on the south island of New Zealand is the reconstruction of the Justice Precinct in Christchurch. This is where the 420 EC-H 16 Litronic will be used, playing a major role in its construction. Its large radius of 75 m will enable the crane to cover the site completely.

The recently delivered 357 HC-L luffing jib crane is already in use in the construction of a dairy processing plant near Auckland. The 357 HC-L will primarily be used to erect prefabricated concrete components. The Micromove fine positioning mode is particularly useful for this work,