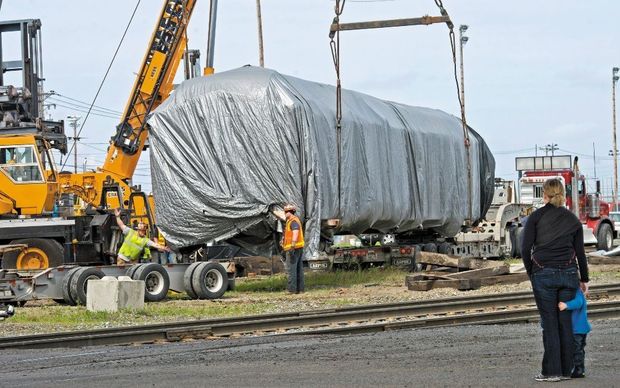 Itâ€™s not easy moving an 80-foot, 104-year-old dining car that was never meant to fly.

But that was the mission Monday for crews from Ness & Campbell Crane and V. Van Dyke Trucking. All they had to do was lift the 50-ton car from its temporary home on Tacomaâ€™s Tideflats, set it down on a pair of low-boy trailers, finagle it out of a tight location surrounded by rails, roads, power lines and an elevated highway, and drive it to Spanaway.

Once there, they had to reverse the loading and lifting process at the LeMay Family Collectionâ€™s Marymount campus, where the car can be restored and one day put back into service as a diner at the LeMay site.

It was the next step in a long process for Dave Burns, who took on this project as a hobby in 1984 without even guessing that it would take this long and cost him as much money as it has â€“ $60,000.

A transport trailer is rolled under a crane-supported 104-year-old railroad dining car on Tacomaâ€™s Tideflats on Monday. The Northern Pacific Railroad car, owned by Dave Burns of Fircrest, was to be moved to the Marymount campus of LeMay Family Collection for rehabilitation and use for food service. PETER HALEY/STAFF PHOTOGRAPHER

Why an antique dining car? To make this long story a bit shorter, Iâ€™ll summarize what Burns has to say just after telling people he owns an antique railroad dining car. He discovered it in Easton while studying at Central Washington University. It was part of the Sportsman Diner since 1949 but had closed when Interstate 90 took travelers a different route.

Years later, he inquired about purchasing the car and was eventually successful. The car tied together his love of history and his hometown. Thatâ€™s because Northern Pacific Dining Car 1663 â€“ one of 15 built in Dayton, Ohio â€“ had been retired from service at the NPâ€™s South Tacoma shops.

The car is right out of the era when the railroad dining experience was white glove and white tablecloth, and meals were served on crystal, silver and china. Inside is decorated with mahogany panels, inlaid wood and carved glass.

Burns brought it over the mountains in 2006 and has been slowly trying to restore it while hoping to build interest in Tacoma for having a piece of historic rolling stock in a town built, in part at least, by the railroad.

Burns received oral support but not much else. The Great Recession didnâ€™t help and then came the eviction notice. A rail improvement project meant the land heâ€™d been leasing from Tacoma Rail would have to be vacated. Burns had a deadline but no place to take the car and no money to move it.

Burns feared he might have to sell the car to collectors who would certainly move it out of Tacoma.

Finally, though, he started to get some breaks. I wrote about the project in February and offers of help started to come in. The one that made the most sense was from the LeMays, who had covered storage to help ease restoration plus a desire to make the dining car part of the permanent collection at Marymount. Eric LeMay said it will fit nicely into the collection, which tries to tell the story of industrialization and transportation in the Pacific Northwest.

Desperate to raise money to pay the $17,000 cost of the move, Burns tried the online fundraising site Kickstarter which helps individuals raise money for creative projects. In just two weeks, Burns raised $17,686 from 165 donors who pledged amounts ranging from $10 to $1,000.

LeMay said the success of the fundraising was a topic of conversation at the World Forum for Automotive Museums in Los Angeles last month.

“The idea that you can create â€˜friendsâ€™ of a particular artifact in a museum who will pay money for the benefits of helping affect its history was a new concept,â€ LeMay wrote. â€œBy Friday night, as the deadline neared, I had attendees who had heard about it asking me, â€˜Did you make it?â€™ â€

Burns says he hopes to have an open house soon to show off the car to those who helped pay for the move. Then, despite the difficult journey so far, comes the hard part: restoration.

Grove cranes get to work in Rajasthan, India