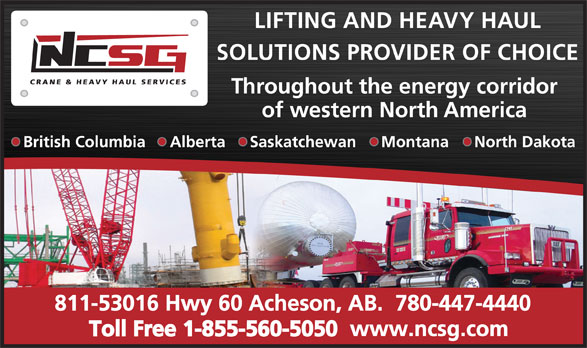 EDMONTON, ALBERTA — (Marketwired) — 06/23/14 — NCSG Crane & Heavy Haul Corporation (“NCSG”), Northwest Capital Appreciation (“NCA”) and TriWest Capital Partners (“TriWest”) announced today that they have signed an Agreement pursuant to which TriWest and Alberta Teachers’ Retirement Fund (“ATRF”, and together with TriWest, the “Investor Group”) shall acquire a majority interest in NCSG from its existing shareholders. Financial terms of the transaction were not disclosed. The transaction is subject to certain regulatory approvals and is expected to close before year-end 2014.

Founded in 1987, NCSG is one of the largest providers of fully operated and maintained crane and heavy haul services in North America, and has over 285 cranes, 235 lines of hydraulic platform trailers, 300 conventional trailers and specialized rigging such as jack and slide systems and hydraulic gantries. This equipment is supplemented by a team of experienced operators, project managers and professional engineers throughout the North/South Energy Corridor stretching from the Yukon to the Gulf Coast.

“We believe the outlook for our business has never been better and that the TriWest led Investor Group will be a great partner for NCSG and provide additional capital for us to continue to grow our business and provide even better service to our blue chip North/South Energy Corridor customers,” said Ted Redmond, President & CEO of NCSG. “TriWest has a long history of working with energy and industrial services businesses helping them expand their geographic coverage and offer additional services. This investment will benefit our customers and partners, and provide additional opportunities for our employees.”

“We look forward to this new partnership opportunity with the management of NCSG, ATRF and NCA. We believe this group has the experience and resources to build a leading global crane and heavy haul services company,” said TriWest Senior Managing Director, Cody Church. “TriWest is excited to work with this experienced team with a proven track record of success in the industry.”

“NCA is excited to continue to be a significant investor in NCSG,” said NCA Managing Director, Brad Creswell. “We are proud to have been part of NCSG’s tremendous success over the last 8 years and believe that with the addition of TriWest our investor group is even stronger.”

Goldman Sachs acted as exclusive financial advisor to NCSG on the transaction.

NCSG began as Northern Crane Services. The company was founded in 1987 and purchased in 2006 by an investor group headed by Northwest Capital Appreciation. Since 2006, NCSG has done eight follow-on acquisitions.

NCSG, based in Edmonton, Alberta, offers rigging, lifting and heavy haul services throughout the North/South Energy corridor. In Canada, NCSG has branches in Edmonton, Calgary, Leduc/Nisku, Fort McMurray, Grande Prairie, Wabasca and Bonnyville in Alberta; Prince Rupert, Terrace/Kitimat, Fort St John and Tumbler Ridge in British Columbia; and Regina in Saskatchewan. In the U.S., NCSG has branches in Soda Springs, ID; Billings and Sidney in Montana; Williston and Dickinson in North Dakota; and Odessa, Texas. NCSG has a diverse fleet of over 285 cranes ranging in size from 6 to 1350 tons and a specialized heavy haul fleet servicing the refining, oil sands, upstream oil and gas, LNG, mining, infrastructure, and wind/utility industries.

Founded in 1998, TriWest is one of Canada’s leading private equity firms, having raised over $775 million of committed capital. We are entrepreneurial, independent and based in Western Canada.

NCA is a leading private equity firm headquartered in Seattle, Washington with over 20 years of experience. Since 1992, NCA has been involved in leveraged buyouts, consolidations, turnarounds, recapitalizations and growth financings targeting the middle market.