KITCHENER â€” Improperly adjusted brakes on the hoist of a crane were a key factor in the death of a worker at a Kitchener construction site in 2011, an inspector from the Ontario Ministry of Labour testified Monday.

Pierre Rouleau was the first witness in the trial, in which London, Ont., developer Tricar Group pleaded not guilty to 11 charges under the Occupational Health and Safety Act. The company faces a maximum fine of $500,000 per count if found guilty of failing to properly maintain the crane or of allowing it to be used when it was unsafe.

The charges were laid after John Catunto, 42, of London, Ont., died on March 9, 2011, after being struck by an eight-tonne slab of concrete.

Catunto, a father of four, was working at the site of a condominium development at 539 Belmont Ave. W. He was rigging loads onto a 60-metre crane, which hoisted the loads up to the fifth storey, then the top floor of the building. 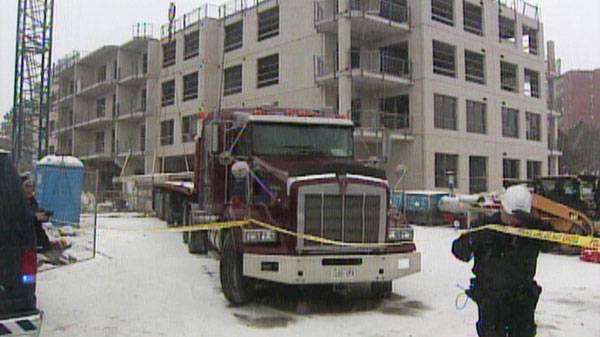 Court heard that the crane had already hoisted several loads that morning, including five other large concrete slabs. As the crane began hoisting the last concrete slab from the flatbed of a truck, Catunto noticed a wooden spacer had been lifted up with the slab.

He told the crane operator to stop, and knocked the wood out from the slab, which was then suspended about eight feet (2.4 metres) above the truck bed. As he walked out from under the load, the load began to descend. Catunto tried to escape, but was pinned to the trailer, suffering a ruptured liver, severed aorta and several broken bones.

Rouleau testified that brakes like those on the crane at the Belmont Avenue site need to be “run in” â€” adjusted so that the brake shoes fit tightly against the brake drum.

The Ministry of Labour examined the crane’s mechanical brake about a month after the accident. At the start of the “running in” adjustment, Rouleau testified, the marks left by the brake shoes on the six- to eight-inch wide brake drum were no wider than the width of a pencil eraser.

“That told me the shoes were not bearing the full width of the drum,” Rouleau said. “To me, it was simple. It was very plain. That brake was not safe. It was not set up, adjusted in order to hold the load capacity.”

He believed the imperfect fit of the brake shoes made it possible for rain or snow to get in between the brake drum and shoes. “In my opinion â€¦ foreign matter â€” water, ice, snow â€” was introduced into the brake. It was just enough to cause slippage at a crucial moment,” he said.

Under cross-examination by Tricar’s lawyer, Rouleau conceded that he had only investigated two other crane accidents in his 10 years as an inspector, and that the March 9 accident was the first time he had ever investigated a potential failure of the brake on a tower crane.

Rouleau also admitted that he could not categorically rule out an error by the crane operator as a factor in the accident.

Tricar’s lawyer, Carl Peterson, pointed out that there were contradictions in the statement the crane operator, Joseph Soares, made to Rouleau. The operator told Rouleau he didn’t touch the crane mechanism at all after Catunto told him to stop, but two other witnesses said Catunto asked the operator to lower the load after his first request to stop, and that the crane did in fact lower the load slightly.

Peterson asked Rouleau if it were possible “that this accident has nothing to do with the brake, snow, relays (command switches in the crane), that Mr. Soares puts it (the load) down instead of up?”

Five of Catunto’s seven siblings attended the first day of the trial Monday, and said the family knows nothing can bring back their brother, but they plan to drive each day from London to hear the trial, which is expected to continue all week.