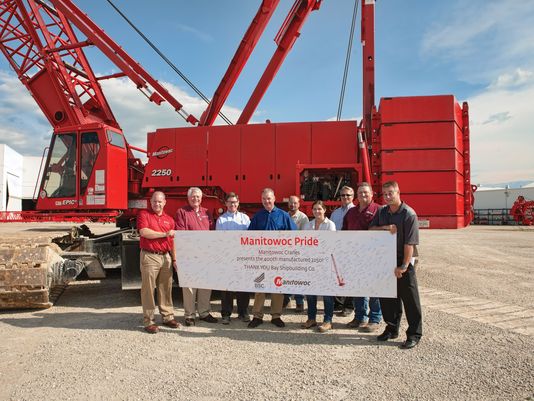 Matt Borchardt, a regional business manager with Manitowoc, said the handover of the 400th Manitowoc 2250 is a momentous occasion for the company. The fact that Bay Shipbuilding was formerly a unit of the Manitowoc Company adds another level of meaning.

â€œThis is a very special milestone that reflects the long-term commitment and faith our customers have in Manitowoc Cranes,â€ Borchardt said. â€œAnd itâ€™s very fitting that the 400th Manitowoc 2250 is going to our former sister company, right in our own backyard.â€

Thomas Martin, director of purchasing and facilities at Bay Shipbuilding, said the company will primarily use the 2250 for the ship-repair portion of its business. In all, Bay Shipbuilding has five Manitowoc crawlers in its fleet, one of which it will retire at the end of this year after more than 30 years in service.

Leadership from Manitowoc Cranes and Bay Shipbuilding celebrate delivery of the 400th Manitowoc 2250 crawler crane built at the manufacturing plant on South 30th Street in Manitowoc.

â€œThis is really exciting and for us it doesnâ€™t matter if weâ€™re taking delivery of the 40th or 400th Manitowoc 2250, we are extremely pleased to add a quality-built asset like this crane to our business,â€ Martin said.

â€œWe are big fans of Manitowoc cranes and the service that backs them. Even better is that weâ€™re purchasing the crane from our neighbors in Wisconsin.â€

One of the companyâ€™s most popular crawler crane models, the Manitowoc 2250 has seen success in industries across the board, thanks to its mid-range capacity and 300-foot boom. The crane also has been used on multiple continents. A surge in energy projects in North America, for example, has driven Cleveland, Ohio-based ALL Erection to employ a large fleet of 2250s on several projects.

The Manitowoc 2250 offers a 300-U.S. ton capacity as standard, which can be increased to 500 tons with the MAX-ER attachment, or increased all the way up to 1,433 tons with a RINGERÂ® attachment.

The craneâ€™s reach can be extended to over 400 feet with a luffing jib attachment, and FACT connectors and EPIC controls make for easy assembly and operation on the job site.

Bay Shipbuilding purchased the crane from Milwaukee-based American State Equipment, which also happens to be Groveâ€™s oldest distributor. It began selling Grove cranes in 1961 and added Manitowoc crawlers to its lineup in 2005.