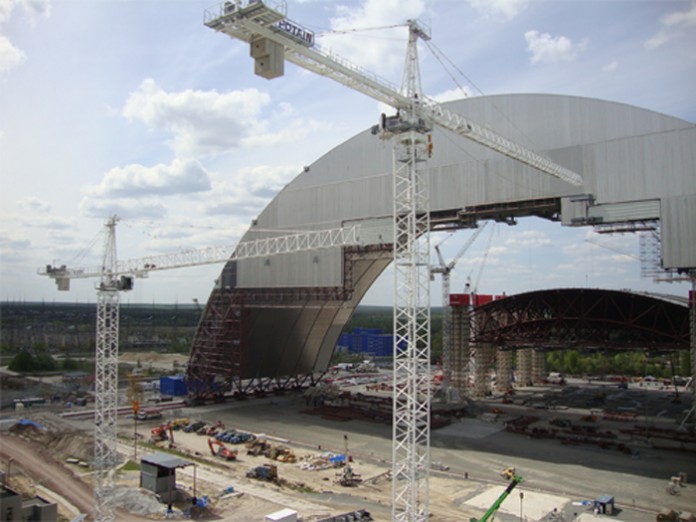 One of the Manitowoc 2250 cranes helping to build the containment shelter for the contaminated zone at the disused Chernobyl nuclear power plant in Ukraine has been fitted with a new luffing jib to help it complete its work. Fitting the craneâ€™s jib, which will give it improved reach capabilities, took approximately two weeks.

The crane is being used to carry out a number of difficult lifts that require the placement of building materials inside the containment shelter. The containment shelter is a unique engineering project comprising a shell measuring 257 m wide by 110 m tall that will cover the existing object shelter. The object shelter is what currently surrounds the remnants of reactor number four, the site of the infamous disaster in 1986. Made from a huge steel frame and a stainless steel roof weighing more than 29,000 t, the New Safe Confinement structure will prevent the release of radioactive material from the present shelter. Ultimately it will allow work to begin on the deconstruction of unit four of the Chernobyl power plant.

The 2250 was installed at the site in 2012 joining eight Potain cranes while a further Manitowoc 2250 arrived in 2013. The Potain cranes include four MR 605 B luffing jib models, and three MD 485 B units and one MD 345 B units, both of which are from the line of regular top-slewing cranes. The cranes were all supplied by Novarka, a consortium formed by French construction companies Bouygues TP and Vinci Grand Projects, which is handling the project.

Jean-Claude Guiter, key accounts director at Manitowoc, has been involved with the project at Chernobyl from the start and he explained that working on such a challenging job site is extremely rewarding both for Manitowoc and its employees.

â€œWorking in such demanding conditions means that our engineering capabilities are continuously tested,â€ he says. â€œAdding the luffing jib to the Manitowoc 2250 is just one example of how weâ€™re continually reviewing performance on the project to see what more can be done. Giving the extra reach to the Manitowoc 2250 has boosted its productivity while continuing to ensure the lifting work stays on schedule for this phenomenal project.â€

Manitowocâ€™s 2250 offers a 272 t capacity as standard. This can be increased to 450 t with a MAX-ER capacity enhancing attachment or up to 1,300 t with a RINGER attachment. The craneâ€™s standard heavy lift boom provides a maximum of 91 m, which can be extended to over 184 m luffing jib extensions. For the Chernobyl project, the Manitowoc 2250 is fitted with a 21.3 m of Manitowocâ€™s #133 luffing jib, on top of the 61 m of main boom.

Because there are still high levels of radioactivity in the immediate vicinity of reactor number four, the giant New Safe Confinement structure is being built 180 m away. It will then be moved on tracks into its final position. The structure will be the biggest of its kind in the world.

Understandably, safety is a huge priority on the job site. Employees have to complete a comprehensive training program and pass strict health checks before they are allowed in to work. Additionally, to enter the exclusion zone near reactor number four, workers have to wear a full-body suit and breathing apparatus plus a dosimeter â€“ which measures levels of radioactivity exposure. The crane cabs in close proximity to the Objects Shelter have been reinforced and fitted with lead protection which acts as a shield against radiation.

Volker Rodenbeck, supervisor for Manitowoc Crane Care, explained the difficulties his team encountered when configuring the cranes for operation. â€œThe erection of the three MD 485 B tower cranes was our biggest challenge as they have been erected near reactor number four,â€ he said. â€œSince levels of radiation increase with height, we had to plan and prepare every stage of the crane assembly in advance. We did as much of the assembly work as possible before shipment to the erection area, to minimize the time workers needed to spend in areas of higher radiation. To fit the luffing jib on the Manitowoc 2250 we were able to handle the work between the construction area for the new shelter and reactor number four.â€

Because the MD 485 B cranes are working in an area where radiation levels are higher, they are operated via remote control.

Ground preparation on the New Safe Confinement project began in 2011 and is scheduled to complete in 2017.

Why Everyone Is Sweet on Crane Maker Terex