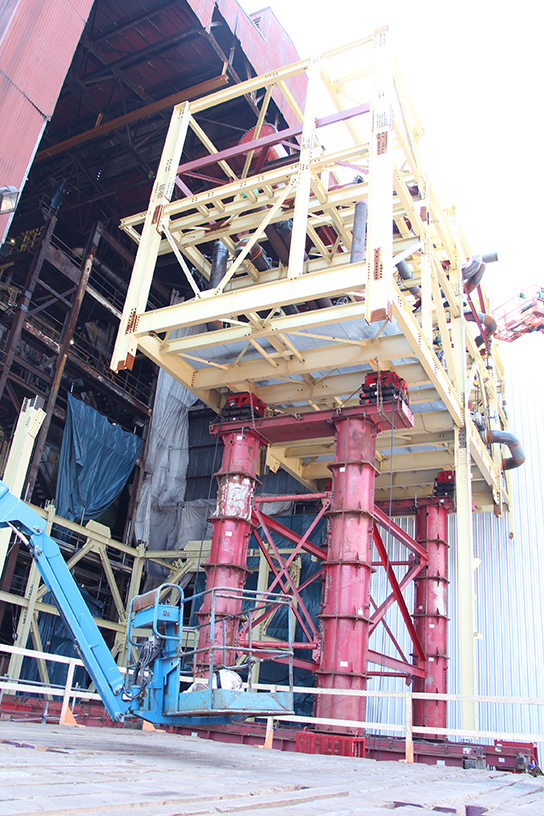 Mammoet has successfully and safely installed three modules to support a new generator and turbine as part of an expansion at the Arcellor Mittal Dofasco steel plant in Hamilton, Ontario, Canada.

From the beginning, the client planned to take a modular approach and build the modules offsite, away from the congested construction area. As opposed to stick-building, this technique minimizes disruption to the surrounding site, while improving safety and reducing downtime. Mammoet was approached in the early phase of planning to devise a way the heavy and oversize modules could then be installed inside the existing plant. Without a way to move the fully constructed structures, the plans for modular construction could not go ahead.

When considering the right solution for the job, it was essential that the equipment used had the capacity to move the modules but didn’t weigh so much that it overloaded the foundation. Through careful analysis and close collaboration with the module’s designers, Hatch Limited, Mammoet determined their Titan Tower system was the best solution. The Titan Tower system was able to disperse the weight of the modules so that, combined with its own weight, it didn’t overload the foundation. As a result of this solution, the modular concept could move forwar.

The Titan Tower system consists of titan stools made of steel that are stacked and fastened together to achieve a certain height requirement. In this case, the individual towers are then reinforced with cross bracing to provide a strong platform. The Titan Tower was assembled on top of a skidding system and then loaded with the modules. The system then moved along the skid track with the modules, crossed over an open pit area using roro ramps, and was placed inside the existing plant. From there, the client constructed permanent steel supports underneath the modules. Mammoet jacked down the modules onto the supports and removed the Titan Tower system, ready to install the turbine and generator underneath. This was executed using SPMTs, Hillman rollers and a Gantry system.

Mammoet’s early involvement in the planning phase, as well as close communication and coordination with other contractors, enabled the modular approach to be realized, improving project safety and reducing downtime of the plant by allowing operations to continue over three weeks through the expansion.