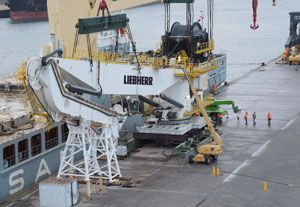 GERMANY â€“ SOUTH KOREA â€“ Despite all the maritime associated large scale engineering which occurs these days in the Far East it was to the German base of crane manufacturerLiebherr to which Daewoo Shipbuilding & Marine Engineering (DSME) turned when it needed some particularly powerful heavy lifting equipment. After sitting on the quay at the Rostock factory since September the Liebherr RL-K 7500 subsea crane started its long journey to South Korea on the longest night of the year, just four days before Christmas.

Together with another model of Liebherrâ€™s range of knuckle boom cranes, the RL-K 4200, the pair were soon safely stowed and on their way to DSME which plans to equip several of its ships with a set of Liebherr cranes consisting of one RL-K 7500 and three RL-K4200. The two other RL-K4200 will follow in the next month or so and a brief reading of the equipmentâ€™s capabilities leads to an understanding of why these units are so highly regarded.

The new subsea crane with knuckle boom represents a convenient solution for subsea operations. Together with the craneâ€™s prototype, the above mentioned RL-K 7500 is already the fourth model to be completed. It features impressive technical figures, being able to lift up to 300 tonnes in the air and handle loads down to a water depth of 3,600 metres. The maximum rope diameter is 82 mm, the maximum overturning moment of the crane is 75,000 kNm. Depending on customersâ€™ specifications, the boom configuration allows for working radii of up to 50 metres.

One vital advantage of the craneâ€™s knuckle boom is that loads can be lowered to the water surface with a short rope length between crane boom head and water line. Furthermore, the crane is equipped with a number of state-of-the-art hydraulic, electric and electronic features and functions, some of which were submitted for patent by Liebherr, e.g. HeavetronicÂ®, PactronicÂ® and the innovative winch system.

Based on sophisticated Motion Reference Units (MRUs) designed in house to recognise and predict the vesselâ€™s motion, the AHC system compensates this movement. Meanwhile, in order to meet the high power demands of the AHC, the hydraulic hybrid drive system PactronicÂ®, originally developed for Liebherr mobile harbour cranes, has been specially adapted for subsea applications. PactronicÂ® is characterised by an additional energy storage device, an hydraulic accumulator supplements the fluid pump in delivering power to the system. It serves as a pressure storage reservoir incorporating a gas in conjunction with a hydraulic fluid. Energy is stored in this compressed gas to be released upon demand.

The revolutionary AHC system is fully integrated in the proven LitronicÂ® system, one of its most important features being its self-learning function. It automatically recognises the vesselâ€™s motion and adjusts itself according to this information, hence the system does not need to be manually adjusted and is independent of weather conditions. Up to 70% of the power required to operate the AHC system is currently obtained from PactronicÂ® which means that the hybrid drive system provides a maximum power of almost 4 MW.

In order to ensure optimised rope guidance, the crane has a patented horizontal winch shifting system. It guarantees the ideal fleet angle of the rope under all load conditions in both hoisting and lowering operations. A further innovation is the vertical winch frame lifting system, which is also patented. Two hydraulic cylinders allow for the adjustment of the lifting height without moving the drum of the hoisting winch, due to the innovative design of the winch unit wear of the main wire rope is minimised, thus significantly extending its service life and reducing life cycle costs.

Easy adjustment to customer requirements regarding load and water depth can be made by exchanging the lebus shells and by adapting the width of the winch to the actual rope diameter. Consequently, the customer is not obliged to change the complete hoisting winch. The RL-K 7500 can be rated both as general purpose offshore crane and as heavy lift crane, being able to hoist loads weighing up to 300 tonnes. It can thus be installed on board drill vessels and heavy lift vessels. The knuckle boom is designed for use in hazardous areas and the crane can additionally be equipped with an Arctic temperature package allowing for operation at temperatures down to -40 degrees Celsius.