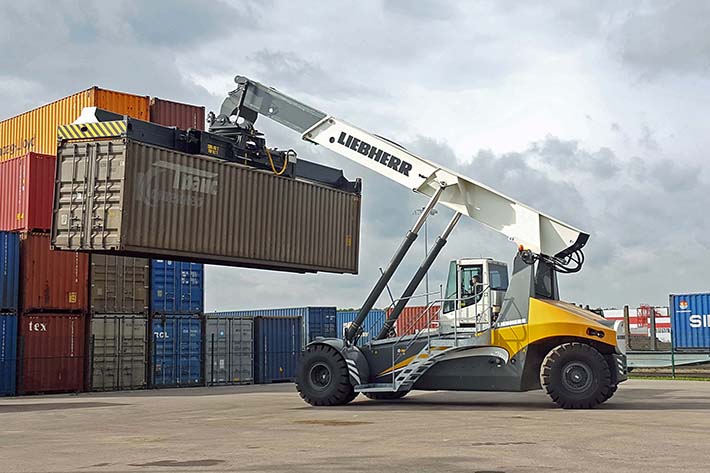 As a part of the CONTARGO group, which is specialised in trimodal transportation, the Duisburg Intermodal Terminal (DIT) decided to test the Liebherr Reachstacker LRS 545 during the daily business. Over the course of time, the Liebherr device made a remarkable impression, not only because of the advantageous design and the utilisation of the latest technology but also as a result of the much lower fuel consumption in comparison to other reachstackers.

The Liebherr Reachstacker LRS 545 is busy handling containers at the Duisburg Intermodal Terminal.

Since its opening in the year 2002 the Duisburg Intermodal Terminal (DIT) ranks, with an annual transhipment of approximately 400,000 TEU, among the major service companies within the trimodal transport sector throughout the Lower Rhine region. As a modern trimodal hub terminal combined with excellent railway connections through Europe, DIT provides apparent advantages for the transportation of overseas containers. Thanks to the remarkable logistic network of the Contargo group, the Duisburg terminal has the possibility to combine different freight flows into competitive transport chains in an efficient way.

Currently the Duisburg Intermodal Terminal is operating ten reachstacker from various manufacturers in a three-shift-operation. Since summer 2017 their fleet also includes a Liebherr Reachstacker LRS 545. After a short period of testing, the port representatives and especially the reachtstacker operators are exceedingly satisfied with overall performance of the Liebherr machine. The drivers commended the reachsteacker due to its outstanding capabilities like an excellent visibility based on its wedge shaped design and the high manoeuvrability despite a wheelbase of 6.5 metres.

In addition to the already mentioned benefits there are several unique technical features like a hydrostatic drive that enables the omission of wear-intensive parts such as the gear or the cardan shaft. The LRS 545 is known as one of the most technically innovative devices in the market, which is mainly due to the single-wheel drive on the front axle and the 230 kW diesel engine (Stage IV / Tier 4 final). If required, it is also possible to additionally install a hybrid system (Pactronic®) with a capacity of 110 kW. Complete equipment with LED luminaires for uniform illumination even in difficult lighting conditions is standard.

As Europe-wide operating logistic companies the Contargo GmbH & Co. KG and her parent company the Rhenus SE & Co. KG are especially focusing on environmentally compatible and resource-saving work practices. They always strive for a balanced concept between economy, ecology and social issues. By opting for a more fuel-efficient Liebherr Reachstacker, DIT set a good example being one of the pioneers towards sustainability inside the Contargo group. Fortunately, the fuel consumption of the new LRS 545 ranges around 16 litres per operation hour under the prevailing circumstances. That enables fuel savings up to 8-9 litres in comparison to competing reachstackers.

In sum, excellent arguments for the responsible director Mr. Bernd Putens and its technical employees to opt for a Liebherr Reachstacker. Subsequent to his trial usage at the Duisburg Terminal, the LRS 545 immediately has been included into the ports fleet. The supervision of the reachstacker is in the hands of a service subsidiary in Hamburg and a branch office located in Oberhausen. In this way it is possible to guarantee short reaction times and the best possible service to the customer.