Liebherr MK 88 Plus in the old city center of Mainz 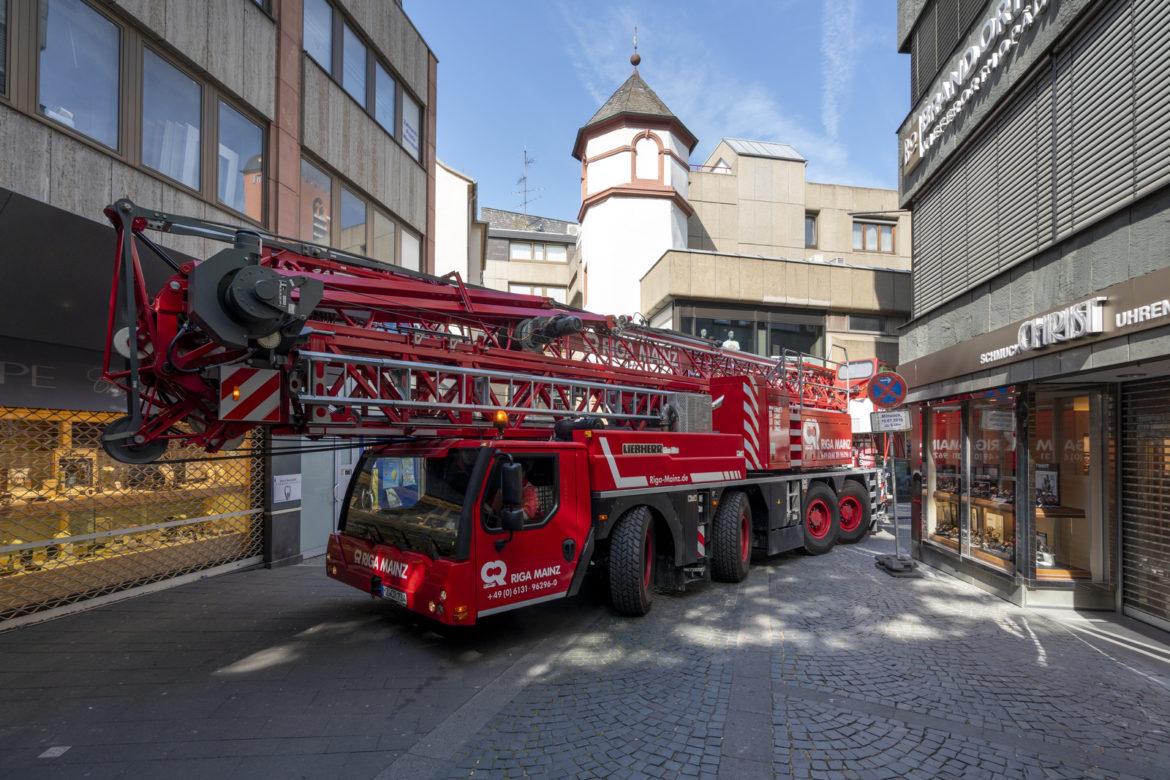 During the use of a Liebherr MK 88 Plus in the city centre of Mainz, the spontaneity of the crane driver and the flexibility of the mobile construction crane were essential: In very restricted space, crane requirements had been changed on site at short notice. Due to technical problems, an air conditioner had to be positioned on a different place on the roof of a commercial building at a greater distance to the crane.  However, this was not possible from the planned place of installation because even from there, the maximum working radius had already been required for the lifting movement. Nevertheless, the team of the crane and heavy-duty logistics company Riga-Mainz found quickly a practicable solution for the new situation on site.

Due to the modified requirements, the crane driver Alexandras Voroneckas had to change arrangements after his arrival on site in the early morning. A tricky situation because the surrounding buildings as well as a large plane tree enormously limited the alternatives for a place suitable for unfolding the jib system in the narrow street canyon.  Moreover, a passage for pedestrians had to be kept free alongside the crane in the approximately ten metres wide alley. However, the experienced crane driver found a solution: At the original place of installation, Voroneckas brought the folded crane into vertical position. In this configuration, the MK 88 could travel approximately five metres closer to the building and unfold its well-thought-out jib system there without any problem.

In order to make also the last section of the required working radius available, the planned 15° luffed jib position was not used for the decisive lifting movement. However, for this purpose, the lifting tackle had to be shortened slightly because the level of the building roof was only just under the 30-metre hook height of the jib in horizontal position. Thus, the air conditioner weighing approximately 800 kilogrammes could be placed very precisely thanks to the Micromove fine positioning mode.

Managing director Uwe Langer: “New MK 88-4.1 will be ordered in any case.”

As one of the large crane companies in the Rhine-Main area, Riga Mainz has more than 40 cranes – all of them from Liebherr, except one. In addition to LTM mobile cranes and a crawler crane of the LR 1600/2 type, the fleet includes also two MK 88 Plus from the Liebherr plant in Biberach. “The MK 88 is the ideal mobile construction crane for us and sufficient for the normal building heights in the narrow old city centre of Mainz”, explains Uwe Langer, managing director of Riga-Mainz. “The crane simply has a very compact and manoeuvrable design.” Furthermore, the managing director is already waiting for the latest development from Biberach. “We will certainly soon place an order for the upcoming version of the MK 88.” With a more variable support and other improvements, this modern mobile construction crane named MK 88-4.1 will offer the customer even more comfort and the usual safe handling. Moreover, the innovative crane can be operated on site alternatively via a 32 amperes electrical connection – without any significant losses in performance parameters.

The professionally carried out use of the MK 88 Plus in Mainz convinced also Martin Stohr, project manager for the installation of the air conditioner: “I have nothing but praise for the team of Riga Mainz. The men delivered an excellent and customised performance.” Despite the extra work, the job could be completed within the already very tight schedule set. Just in time for the opening of the shops, the MK 88 left the pedestrian zone of Mainz.

Visions of the Emirates: when the superlative becomes reality