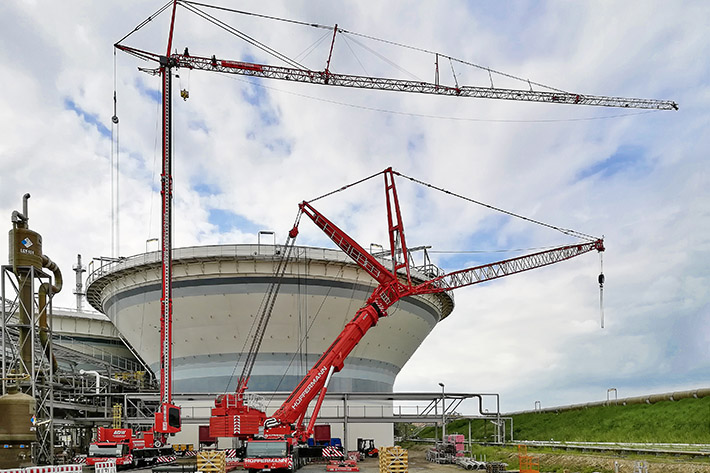 Biberach an der Riss (Germany), 12 December 2019 – From setting up the site at the reactor to lifting in environmental service employees, to the (dis)assembly of diverse scaffolding, the MK 140 Plus Liebherr mobile construction crane has been in constant operation at a chemical plant. In the German city of Stade, a reactor was shut down, cleaned, serviced and overhauled.

Assigned diverse tasks, the MK 140 was in almost daily demand for around 10 hours per day, over a nine-week period at the wastewater treatment reactor of the American chemical company Dow. Its 58.5-meter maximum radius in trolley mode meant the crane was able to cover the area of the reactor with ease. “We had already achieved positive results with an MK for work on a previous reactor, the LR-600. However, the MK 110 that we used was already pushed to its limits back then. As the LR-602 is higher still, and we had to hoist significant loads again, we decided on a MK 140 this time round – purely because it offers the necessary hoisting height,” says Alexander Kehrbach, Work Coordinator at Dow.

Let there be light

The construction site needed optimal lighting from the outset as some of the work was carried out well into the night. For this purpose, the MK 140 lifted the necessary material, including site lighting, into the reactor. Supplemented by the light of the LED floodlights positioned on the MK 140’s jib, the reactor and its environment were brightly lit, early and late each day.

Lifting to the limit

The heaviest part to be lifted was a reactor cover weighing 2,800 kilograms. This was at a reach of 33.5 meters and the cover had to be lifted out into the open from inside the reactor. “The radio remote control was perfect for this: I was able to move freely and always had the load firmly in sight,” says Crane Operator Stephan Achenbach. He was impressed time and time again by the precise control of the MK, even with such heavy loads on its hook. The reactor cover was set down outside of the reactor and later sandblasted before being put back in its place once the sanitisation process was complete. For even heavier loads, the MK had the temporary support of an LTM 1500-8.1 Liebherr mobile crane, which has been a successful part of the crane services company Hüffermann for many years. This crane, for example, lifted the 12-tonne scraper bridges out of the secondary sedimentation tanks and then positioned them again after repairs.

For the precision sanitising of the secondary sedimentation tanks, the MK 140 lifted several employees of a sanitisation company into the reactor in a specially authorized passenger transport cage. Additional safety, especially for this phase of operation, was ensured by the presence of a redundant power supply and the trolley camera, which enabled crane operator Stephan Achenbach to have everything in sight at all times. Two weeks before the start of this phase, the crane service provider Hüffermann ensured that the passenger cage was officially authorized for use.

Good to know: For faster handling of projects of this type, Liebherr offers specific additional equipment for the MK 140 for passenger transport. In Germany, a mobile construction crane with this equipment is automatically compliant with the passenger transport regulations from the authorities (BG Verkehr).

In order to apply a completely new coating to the reactor after its sanitation, a large scaffold was erected inside. This meant that the MK 140 had to lift a total of 125 tonnes of scaffolding material within four days and three night shifts. In addition, the MK 140 also lifted the mobile scaffolding for the sedimentation tanks as well as various other materials and further perforated sheet metal covers into and out of the reactor.

Crane Operator Stephan Achenbach was completely satisfied, “It was a job with lots of different aspects and tasks – sometimes involving radio remote control, sometimes the height-adjustable cab. Plus the team work of those involved was great. Overall, it was good fun,” says Achenbach.

Mammoet celebrates 30 years of operation in the United States