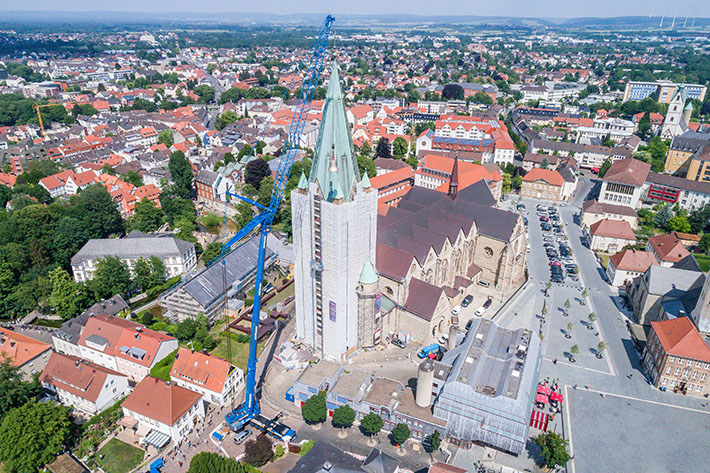 A Liebherr LTM 1500-8.1 mobile crane operated by Hofmann Kran-Vermietung GmbH & Co. KG played a major role in the musical enhancement of the chimes at Paderborn Cathedral. The eight existing bells were supplemented by two additional ones. The smaller one, weighing in at just one tonne, was no challenge for the 500-tonne crane. The installation of the larger bell, weighing 13.5 tonnes and with a diameter of 2.7 metres, on the other hand, demanded precision from both the crane and the installation team.

Hofmann assembled the LTM 1500-8.1 on the cathedral square in constricted conditions with a 42-metre luffing jib and 90 tonnes of ballast. There was no need to guy the telescopic boom for the planned load cases. The crane operator extended the telescopic boom to a length of 47 metres to hoist the bells to a platform placed at a height of 32 metres on the tower, as they had to be lifted over high scaffolding parts. The bells were placed on a carriage and pulled through an existing window into the belfry. Although the window had been enlarged beforehand for the large bell, the crane and team had to work with millimetre precision to move the massive bell into the correct position. 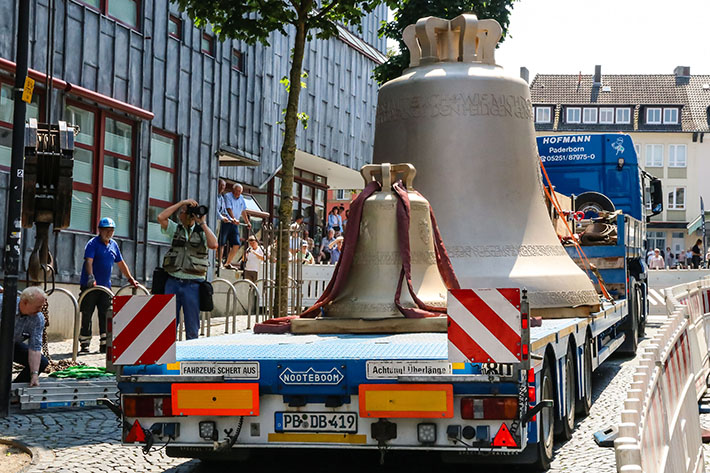 Hofmann Kran-Vermietung GmbH & Co. KG (previously Walter Hofmann KG) has been involved in the mobile crane rental business since 1962 and currently has a workforce of around 120. Its fleet currently comprises a total of around 400 vehicle units. These include over 50 mobile cranes (capacity classes 7 – 750 tonnes), 70 semi-trailers and 185 work platforms. Hofmann is now part of the Bracht Group.